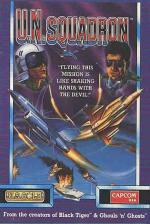 Eutal is a remote Middle Eastern country in the grip of a bloody civil war, and as a result of this conflict a vicious band of arms dealers, Project4, have arisen. They've developed a range of powerful weapons with which they plan to take over the world. But not if the free world has anything to do with it: the UN Squadron have been called in to stop the megalomaniacs.

You control one of the three brave Squadron pilots: Shin Kazama in his Tiger Shark, Mickey Simon in his f_14 and Greg Gate in his Warthog A-10 Thunderbolt. Take off with an optional second player and it's up into the wide blue yonder to shake hands with the devil (as the advertisement says).

Each plane contains a permanent weapon, but a range of bolt-ones are available from the Capcom shop, at a price: bullpups, missiles, napalm bombs, super shells and a nuclear warhead called Bigboy (which sucks all the paint off your house and gives you a permanent pink suntan). The first mission takes you to an enemy base where helicopters, tanks, planes and an aggressive end-of-level tank await. Each level scrolls horizontally with an impressive amount of action happening on-screen.

Level two has you up in the air to destroy a stealth bomber, heavily armed surrounding notwithstanding. Level three takes us to a forest to kill the enemy and destroy the end of level fortress. Level four is set in the desert, your mission to destroy a huge missile silo. On to level five and half way through the game: here you're taken to a spectacular rocky scene where you must battle helicopters and fighter bombers to reach the massive helicopter at the end. Levels six to nine take you to a cave, an oil refinery, the ocean and a mountain range respectively. Whilst level ten is a very special mission to round off a very tiring game: blast your way into a mothership and destroy it.

My thumb is killing me after playing non-stop for several hours on this fast and furious all action game! UN Squadron certainly gets the adrenalin pumping, and it'll probably wreck your joystick. The sprites are highly detailed and scroll smoothly against the varied backdrops. The enemy forces are highly aggressive and must be treated with due caution: only master blasters are likely to survive more than a couple of missions in the first few games - maybe the difficulty level is set a little too high for less experienced players. However, there are up to five continue plays. UN Squadron is a fast and challenging shoot-'em-up, well worth checking out!

'UN Squadron includes some really great graphics for you to blast out of the sky, and some impressive weaponry to do the job with. Graphics are excellent throughout, with highly detailed enemy carriers, helicopters and planes of all types. Your finger's hardly ever likely to leave the fire button! If you aren't an expert at this type of game you're not going to get very far, with difficulty seemingly set for the real professional. UN Squadron is a great shoot-'em-up romp with a ton of impressive enemies to take a pot shot at!'

A great shoot-'em-up romp with a ton of impressive enemies to take a pot shot at!