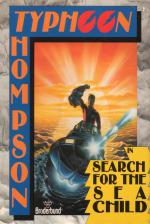 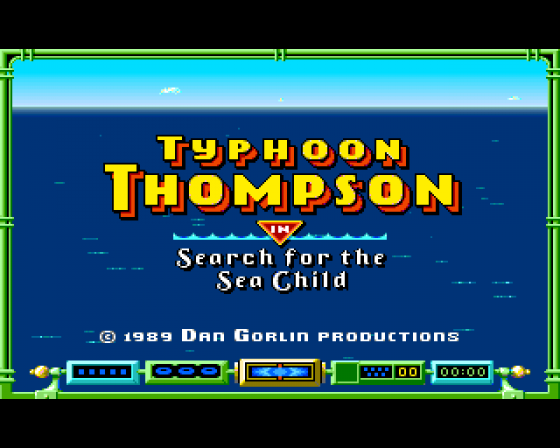 Sea sprites are the cutest things in the known universe. Living on groups of tiny islands on the planet Aguar, they're yellow furry things which can swim like dolphins - and turn bright red with popping eyeballs when they're angry. What's more they're incredibly possessive little varmints, so when Flight 396 goes down over the planet we know we've got trouble. The only survivor of the crash is a human child.

As the incredibly famous Typhoon Thompson you've dropped on Aguar in your Jet-Sled. After visiting the Spirit Guardians (who give you an extra life and three extra Jet-Sleds) you set off to find the first of four magicial artifacts which need to be collected before you can rescue the infant. Each artifact is lovingly stored in a Treasury Dome located at the centre of an island village. To get the object you must first kidnap all the sprites in the village.

To lure a Sprite out, you merely need to blast its home (there are six per village) with your laser cannon. The enraged Sprite will then leap into its Flyer and come zooming after you. Flyers range from Bumpers (which merely push you around) to Suckers (which love eating Jet-Sleds) and Zappers (which blast both Sled and you to atoms!). Shoot a Flyer and a dazed Sprite will fall into the ocean, utterly helpless for a short while so you can scoop it up into your sack. Take too long though, and it'll start swimming back home. 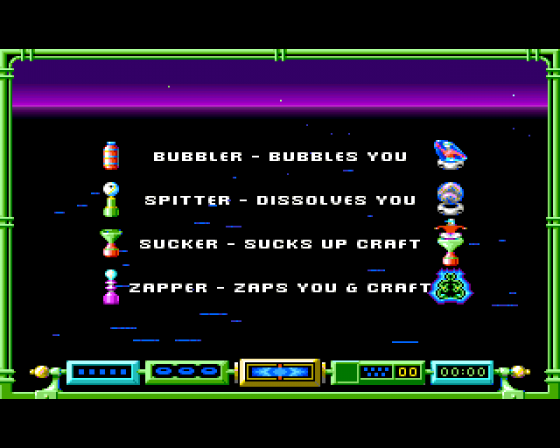 On higher levels there are up to three Sprites in each island home, and if you let just one get home three are restored to that island! Fortunately, on the more advanced missions you're given additional weapons, such as Freeze and Scatter Bombs.

Once you've collected all the Sprites you must go to the Treasure Dome in the hope of swapping them for the magical artifact.

Typhoon features the kind of cuteness that usually has me reaching for the sick bag, but it's all so incredibly well done, even if I was taken aback. 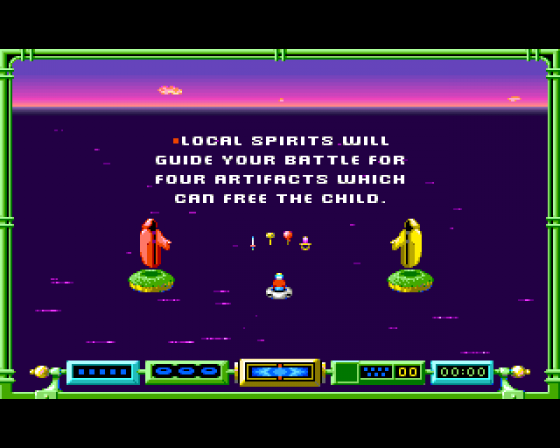 The quality of the animation on the tiny sprites matches anything seen in Space Ace, minus the tedious disk accessing, plus a superb game. Zooming around in the Jet-Sled and blasting the cutesy Sprite critters is great fun, while the various types of Flyers all present their own challenge.

I'll get the bad news out of the way first and say that Typhoon Thompson is a little easy to get through but then some people find it tough (Plug of the Month: see my tips on it in this very issue!). On the positive side it's such a rewarding and utterly charming game to play with a fabulous ending that this 'fault' can be forgiven.

As expected, programmer Dan Gorlin's eye for superlative character detail is shown off to the full with this fun game. The animation of the Treasurer Sprite getting angry never fails to draw a smile whenever I see it. 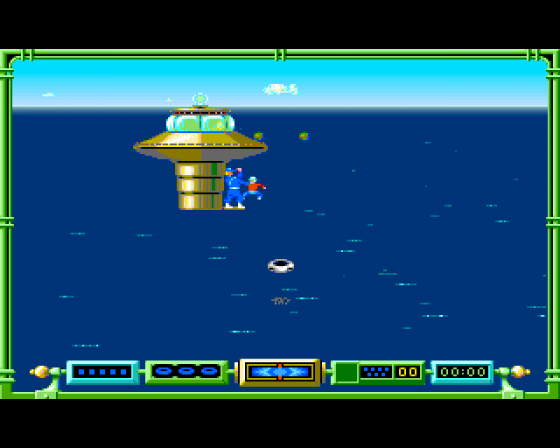 If anything, the tune is a little slow paced but works well in its own simple way - the stereo effect is great through a Hi-Fi. I hope this is just a first of a series of 'Typhoon' games.

Hookability 91%
Takes a short while to get into, but soon becomes incredibly addictive and really enjoyable.

Overall 88%
A classic arcade game with some great humour.

A classic arcade game with some great humour. 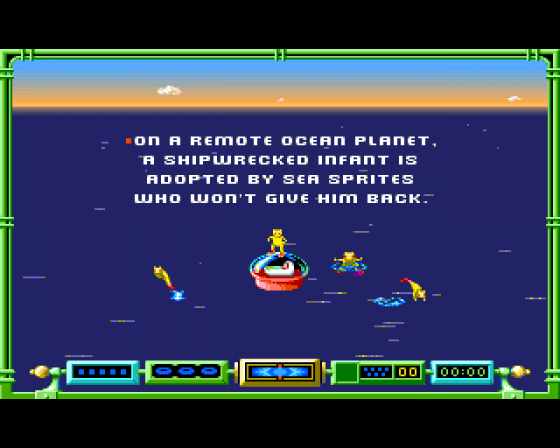 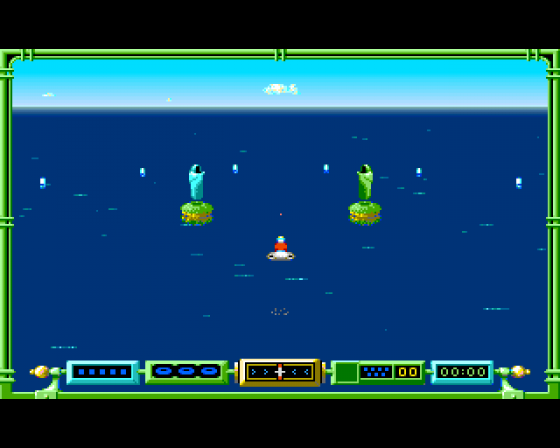 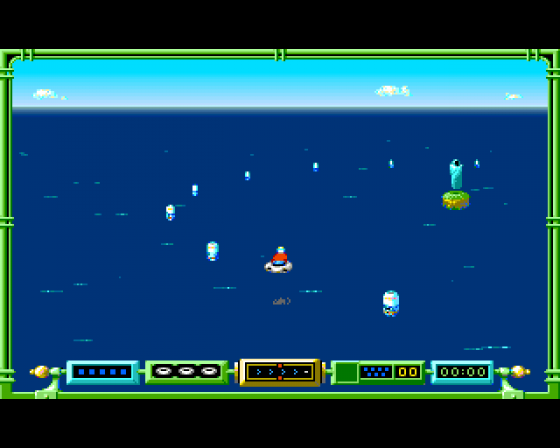 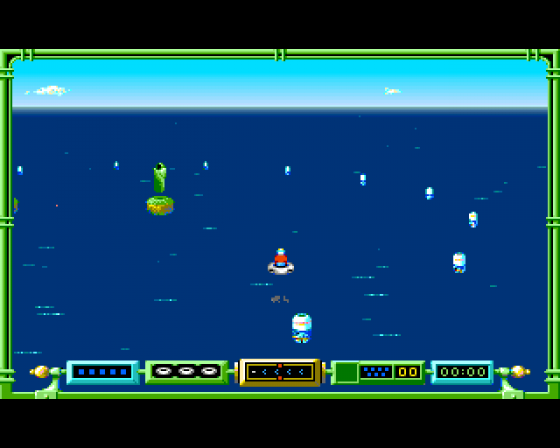 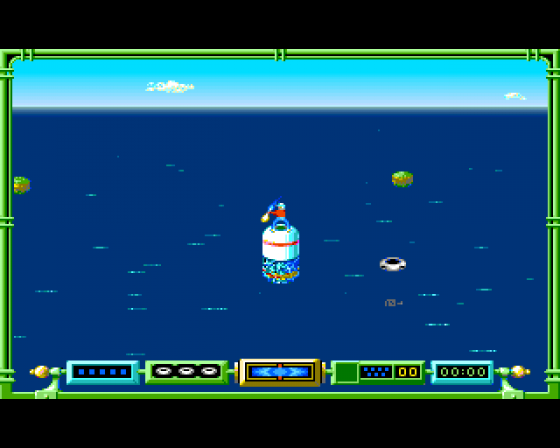 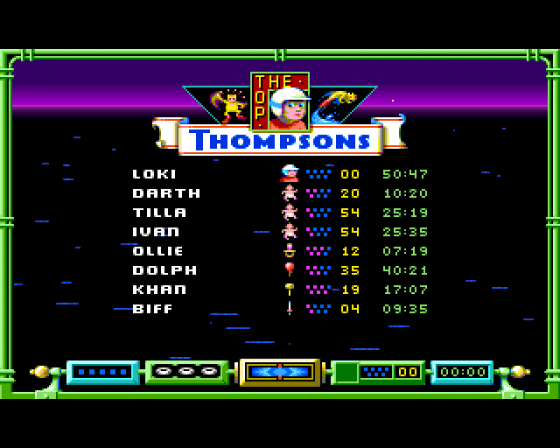