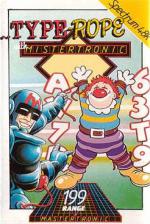 Type-Rope is described as being designed for younger children with the purpose of giving them hours of educational fun. Using cartoon/arcade type graphics of a high standard, a series of very large "lovable" characters like a clown or a bunny are depicted using multi-colours. Down each side of the character is a collection of letters or numbers as they appear on the keyboard. Each is connected by a finely drawn line to another on the other side of the character, but not straight across. The result is the impression that the clown, or whatever is tied up, and the purpose of the game is to untie them.

Untying is achieved by identifying the first letter, pressing the relevant key, then pressing the one to which the rope is connected. If all the ropes are untied in the limited time available, then a new character is drawn, but with more ropes. When you finally fail, your score can be entered into the hall of game.

Presumably, the educational content is the reaction timer, together with the number and letter recognition. Unfortunately, young children use lower case letters at the start of their schooling, not upper' case as found on keyboards and in this program, so this isn't really of much value to them educationally. It would help them to learn the layout of the keyboard, but a variable time interval would have been useful. Cheap, nicely presented, fairly easy to use, but of limited value.

Cheap, nicely presented, fairly easy to use, but of limited value.