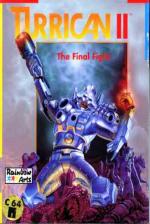 The destruction of Morgul, the three-headed demon which has inspired nightmares for millennia, has made Earth a very boring place indeed. Just imagine you were living in New Zealand and you can see how dull things were. Obviously Morgul's vanquisher, the heroic Turrican, is rather stuck for something to do. Endlessly appearing on talk shows is beginning to threaten his sanity, and he longs for the days when battleship-size piranhas were snapping at his heels. Fortunately, at the moment when Terry is about to fondle his knee for the hundredth time, news comes of an enemy who makes Morgul look like an irate traffic warden.

According to a crackly broadcast picked up by NASA, the planet Landorin is under threat from the merciless legions of The Machine. Many light years away, the Landorins have sent this special transmission as a final, desperate plea for help. A long and bloody war has destroyed the Machine's moon-sized war machine, but the surface of the planet remains under the Machine's control. The Landorins have taken shelter in the core of their planet and can only pray as the Machine's army of mutants and robots search for an entrance. Time is running out fast...

Turrican knows that will be his greatest challenge yet, but the grateful people of Earth are quick to offer support. The brilliant scientists who constructed his famous powersuit offer to improve it, packing in even more weaponry. The laser gun has been updated so the long beam weapon, activated by holding down fire, is even better when swung in those lethal 360-degree arcs. Grenades have been eliminated; in their place an even more devastating smart bomb has been fitted. Pressing fire and down fills the screen with lethal shrapnel as Turrican whirls about in gyroscope form. Normal smart bombs are still activated by simply pressing Space, while gyroscopes are unlimited. Pressing Space and pulling down transforms Turrican into the fast-moving wheel-like thing useful for getting out of tight situations. For offensive capability, unlimited mines can be dropped by pressing fire while in gyro-form.

Turrican's chances can be further improved by collecting capsules dropped by killing certain aliens or banging into special rocks. Extra lives, powersuit energy, smart bombs and weapon upgrades - changing the laser gun so it fires lethal bouncing balls, lengthening the beam weapon and simply making laser bolts bigger. Turrican can also pick up the numerous diamonds which are lying around. If he collects around a hundred, which means virtually every diamond on a world, he gets a continue-play.

To defeat The Machine, Turrican must battle through five distinct worlds. Each world has two levels, apart from two and three which have three levels each. All the levels are multi-loads, although new levels within worlds don't take that long to load since they share similar graphics.

Most of the levels consist of vast, multi-directionally scrolling mazes packed with masses of aliens. There's simply too many to describe, just all sorts of flying, walking, crawling and swimming villains. On many levels, there's two huge end-of-level creatures to face!

The first level starts on the surface of Landorin, complete with a powerful wind which blows leaves, walkers and Turrican across the screen! As Turrican penetrates deeper into the planet, there's dozens of waterfalls (which make leaping upwards difficult) and more tricky winds. At the end of World Two, Turrican gets in his spaceship for the next three, horizontally scrolling shoot-'em-up levels. The first of these has a great parallax scroll, the second allows some vertical scrolling while the last features an ever increasing scroll speed! The next world sees the spaceship crash, and Turrican gets out to take on masses of whirring cogs. The final world is a spooky, somewhat gory Giger-style level, with all sorts of Alien-like creatures to beat, including the facehuggers.

There's also a vertically scrolling shoot-'em-up level much like the one in the original, only better!

This game is the sort of program you'd expect to hear about appearing on some exotic, super expensive Japanese console. 1,500 screens, twelve levels and five completely different worlds on the C64 would normally suggest microscopic graphics such as in Loderunner, but Turrican II rivals anything yet seen on the Commodore 64. If occasionally a few enemy graphics, such as the piranha, look unremarkable then consider the speed of the multi-directional scroll and the gorgeous backdrops.

It's unparalleled technically, but married to artistic genius. The rich texture of rock formations and suchlike are a world away from all those bland, compromised coin-op conversions.

The walkers are terrific too, they look like Amiga characters and it's hilarious when they get squashed off and go running off, squealing!

Of course, the basic game is very much a sequel of the original, but numerous new elements and improved graphics (yes, it is possible) make it a worthy Gold Medal. Quite simply, what other game apart from the original bears any comparison in scale, imagination and ambition? The campaign for a Turrican III starts here...!

Maybe Turrican II isn't the milestone that the original Turrican was, but it's an astonishing piece of software nonetheless, boasting Amiga-style performance crammed into a C64. Manfred has made a true sequel of it with new ideas such as the "Denaris-style" section (complete with gorgeous, superbly detailed parallax scroll) and animated scenes such as building the spaceship (and subsequent crash-landing) and an arcade-style intro sequence.

On top of all this, Manfred's managed to not only retain sections like the vertical jet-pack scenes but he's improved on them with another level of parallax scroll, new-style alien attack waves and (get this!) even bigger guardians. Manfred's fondness for coin-op style 'big baddies' is perfectly demonstrated here - especially with the three-screen-high monster.

The size of each level is daunting and has the slightly negative factor of making for repetitive play if you get lost, but for Turrican fans, and mappers alike, this has instant and ongoing appeal. This 'bigger and better' feel is evident throughout with new features like the wind blowing around, the mega-Super Smart Bomb, the ground falling away beneath you and background graphics like the cogs suddenly coming to life.

Space would quickly run out if I tried to list half the new stuff in it. As well, you have enhancements of existing features - new-style lasers, lightning bolt, little has been left as it was in the first game except for Turrican himself.

The level of detail is simply incredible and applies right down to the smallest of creatures: the fish falling down the waterfall to land in the water and swim around, the walkers scampering around, even the tiniest of gun installations does it own thing, all performing in their own unique way.

Oozing polish, technical brilliance, Manfred does it again with possibly the game for 1991 (and it's only January!).

The original Turrican was truly amazing, and unlike most sequels Turrican II is a lot better! Somehow, Manfred Trenz has managed to improve on the seemingly unsurpassable. Some of the huge, several-screens-high (I'm not kidding!) baddies are even bigger than any yet seen on the Amiga!

And they're smoothly animated and incredibly fast too! I especially like the massive bat-creature which tries to reach out and grab you with its claws - and when it can't get you it starts smashing against the wall in anger!

But it's not just the large showpiece graphics that impress: as well as being superbly detailed, the backdrops aren't just decorative but an intrinsic part of the gameplay with blocks of stone crumbling beneath your feet, rotating cogs to crush you, various obstructions to blast a hole through, and the brilliant wind effect with leaves blowing around realistically.

The slickness of the whole game is just like the very best of coin-ops, but free from the constraints of a conversion. Manfred has let his imagination run riot with an incredible variety of aliens throughout twelve massive levels. There's everything an arcade fanatic could possibly want - exploration, platform leaping, strategic use of weapons, horizontally and vertically scrolling blasting action - all rolled into one game.

I must disagree with Robin: I think Turrican II is as much of a milestone as its predecessor. A truly remarkable programming achievement and a great game to play - it's like having an original coin-op in your bedroom!

Presentation 91%
Great intro and 'game complete' sequences. Multi-load for each level, but considering level size this is fine. Getting a continue-play is tough.

Graphics 96%
Five distinct graphic styles, numerous aliens and monstrous super-baddies are all rendered with superb artistry. Beyond comparison for sheer variety and imagination.

Lastability 97%
...but this massive game is a lot tougher than the original! Variety of graphics and gameplay will keep you playing forever.

A truly remarkable programming achievement and a great game to play... An original coin-op in your bedroom... The graphics and gameplay will keep you playing forever.