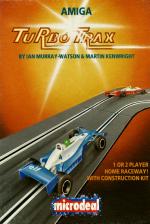 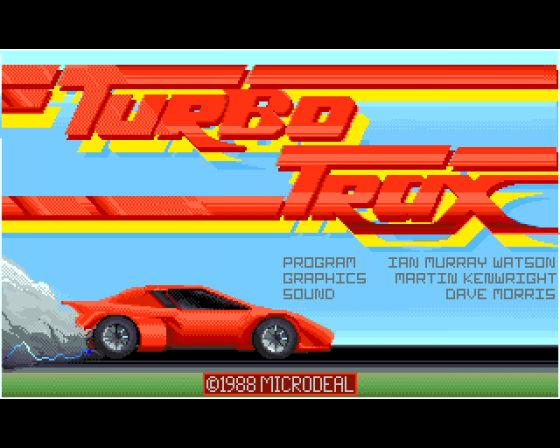 Have any of you readers out there had a run in with your folks because your Scalextric or TCR cars flew off the track and hit the cat or smashed an ornament? You have? Well this is just the thing for you! Turbo Trax is a slot racing system incorporating all the features of a standard layout - including crossovers, chicanes, and even a pitstop - without the hassle of causing severe damage to anything else. Good, eh?

The first thing that appears is the options menu, which allows you to choose a pre-defined track, load a custom track from disk, choose wet or dry driving conditions, select the number of drivers, the number of laps to be raced and the car you wish to control.

Once the options have been set, moving to the OK icon exits the menu and moves to the track. The race is seen as a plan view on a split or single screen - depending on the selections made. The cars (or car if you're playing a time trial) sit on the grid with their engines running, until the green light appears and they're off! 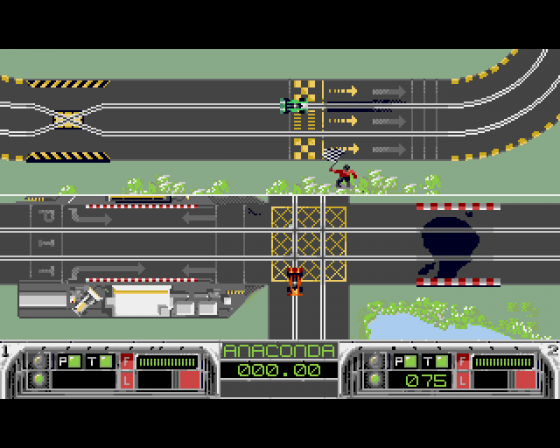 You steer by pointing the joystick in the direction of the track (except on curves) and get a burst of speed by pressing the fire button. Zooming too fast into crossovers or chicanes will turn you over and cause damage, as will riding fast over rough track. However, repairs and refuelling can be carried out by stopping in the red and white zone of the pits. Unfortunately, a crash involving both cars on a crossover causes the race to be abandoned.

By the way, if you get tired of the tracks included, you can design your own with the track editor.

I used to have a TCR set yeeears ago. Unfortunately, it didn't last long because someone stood on the pieces of track and bent the connections so that they didn't fit together any more. It's a good job you can't do that on a computer, or I wouldn't be able to keep playing Turbo Trax as much as I'd like. 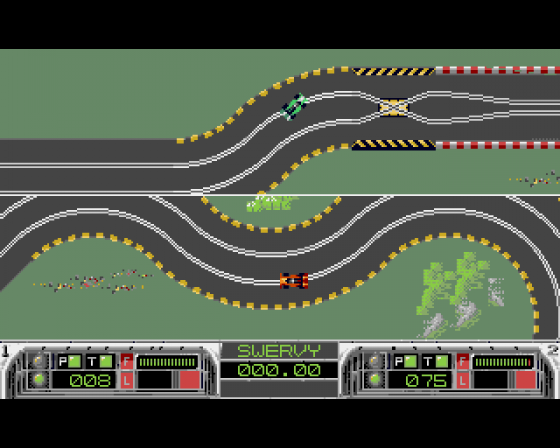 It's just as much fun as playing with the original slot racing sets and it's got all the bits that are expensive add-ons with the kits. Things like smoke effects, sound, pitstop, scenery an' all that an' everylin'. At 25 quid it is a little expensive, though; even so, it works out cheaper than a Scalextric. By the way, did you know that the Kalashnikov AK-47 can fire 600 rounds per minute at a Muzzle velocity of 710 m/s (2380 ft/s)? Might be useful, that.

When I was merely an embryo fat person, I used to enjoy building really big layouts with my Scalextric set. The thing about Turbo Trax is that you can't build really big layouts and you can't make bridges. The designer is just about the only thing that is wrong with the game, however, as it's a lot of fun to play, especially against another person. Zooming past your opponent and knocking him off the chicane is immensely satisfying. I just wish that the freedom of the designer matched up to the playability of the racing: that would have been brill. Another thing, did you know that the Kalashnikov AK-47 fires 7.2662 mm rounds? Remember that.

Presentation 89%
Lots of options, choice of tracks and cars and a course designer. Nothing about Kalashnikovs, though.

Graphics 86%
Simple but effective sprites and smooth scrolling that effectively captures the atmosphere of slot-racing.

Sound 76%
An average tune and some good revving and crashing noises.

Hookability 90%
Great fun at first racing around the pre-defined tracks...

Lastability 71%
...but its appeal only lasts as a two player game and the course designer is rather fiddly to use.

Overall 76%
A great racing game which is just slightly too expensive.

A great racing game... which is just slightly too expensive. Great fun at first racing around the pre-defined tracks though. 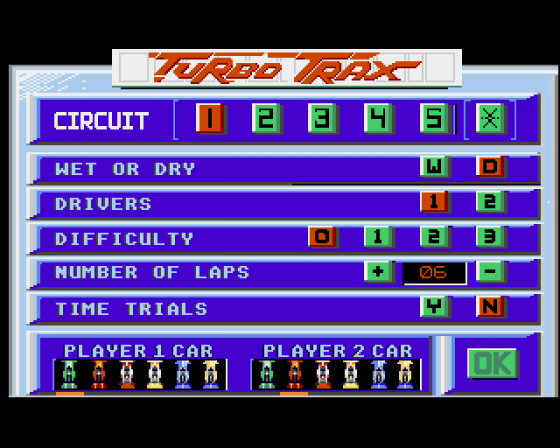 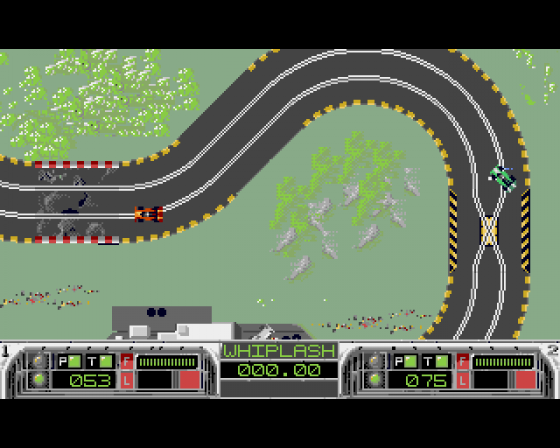