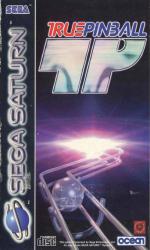 Pinball tables come second only to trivia games in the quick-ways-to-lighten-wage-packges-down-the-boozer stakes. In truth, the person who invented these complex coffins of flashing lights and sound effects hit on a more effective way of making money than encouraging people to spend hours pouring brown liquid down their throats. 50p can disappear as easily as a ball slipping down the side channel or forgetting whose body was discovered in the first episode of Eastenders, for the Bellfruit edition of Noel's Telly Addicts.

Profligacy of this type is not encouraged in Sweden, where it is very cold. Children there are encouraged to create their own tariff-free cardboard versions of pinball, or, in the case of Digital Illusions, generate some startlingly convincing digitised tables for the Sega Saturn, and call them True Pinball.

Keeping the ball above the flipper line is admittedly helpful, but the real skill develops more slowly, with high scores available for activating each of the four tables' modes. The dot matrix display changes to show various challenges set to time limits.

One aspect of choice afforded by True Pinball is the viewing perspective. Initially, when we looked at the game in preview form a couple of months back, the 3D view made things quite difficult, and the flat, scrolling 'top' view was preferred. However, the finished version's raked view on the highest resolution is both a realistic portrayal of how a table looks, and comfortable enough to play on. However, as 'our Graham' would put it, the choice is yours.

If you're considering True Pinball, you should bear some facts in mind. Virgin's Tilt, although looking very nice, is not now due for months, and the existing alternative, Digital Pinball, is a megabore. Digital Illusions, on the other hand, have put together a confident little number that sticks to the look, feel and play of the real thing (hence the name). The effect is a game that doesn't really connect in the short-term, as most of the bonuses require extended and skilful games to access. Play it longer and the humour and variety comes across, along with sheer quality programming. Naturally, only fans of the one true pinball should approach True Pinball, but they won't find it wanting.

Hi there fellas. I'm Miss Flipper, the hit with the flips. I just love playing with the balls as they roll around the table - it's fantastic. He, he, he. Anyway, you want to know about True Pinball, huh? Well, it's topper fun everyone.

Silky graphics and some smart effects make this about as True as it can get, but it means that I'll be out of a job, because I won't be able to cavort all over the arcade machines as you'll be playing at home. Anyway, you should try posing on a Saturn. It hurts your bum no end.

But enough about me and my glamorous showbiz lifestyle. As my friend Gussy said, this is definitely one for the pinball fans and maybe it'll convert the non-flippers among you. It may be worth a look. Anyway I've got a bit more exposure work. Now, where's my eyebrow pencil?

Animation 65%
P. The ball moves well and always stays in vision.
N. No swanky attempts at scaling or panning the camera angle.

Effects 83%
P. The cheesiness, abruptness and disparate nature of many of the effects is strangely apt for a pinball game.

Playability 86%
P. Should meet with approval from genuine fans.
N. The less dedicated amongst us may, conceivably, get bored.

Lastability 84%
P. A reasonable amount of depth for each table.
N. The lack of a ram save for scores is a nasty ommission.

Overall 85%
True Pinball is both veracious and vivacious. A successful outing with flippers for Ocean.

Both veracious and vivacious. A successful outing with flippers for Ocean.