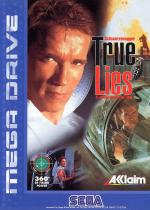 Arnold Schwarzenegger has had two lives. The first was spent under a bench press, pulling funny faces and popping veins out of his neck. Then he decided to get another. This second, more enjoyable, life involved champagne, limos, big movies... But there have been downs as well as ups.

Take Terminator as his first big break. This was solidly backed up by Predator, a sweaty jungle affair, taking him into the big budget league. Red Heat, where he cleverly plays a Russian (by not saying anything and having a cob on) also reinforced his apeal. Then he makes Kindergarten Cop (Hum...), Twins (Gnnnh!) and The Last Action Hero. Stop!!

It looked like someone had led Arnie off the golden path. His appeal is not based on him being big and cuddly - just big. He doesn't pack in the punters for being some gentle giant - just for being a giant. And thankfully this was worked out in time for True Lies, last year's hit that reversed the trend. A stupendous effects movies - in many ways a ridiculous movie - it didn't do Arnie any harm, and the tie-in won't do Acclaim any damage either, despite the game trailing the film just a tad.

Kill! Kill! Kill! Find weapons and complete each of the mission directives.

So what happens? Special Agent Harry Tasker is on the trail of Middle Eastern terrorist Aziz and his cohorts, and is sent around the world to gain information on their activities. Each level works into the film storyline with a digitised still from the film, and an introduction from Harry's Secret Service handler. The twist in the story comes with Harry's job being a secret from his wife and family.

One novel aspect of True Lies is that not all the character milling around the levels should be shot. Each stage is crammed with innocent civilians who often get in the line of fire. Naturally, killing them is a sackable offence!

But you are allowed to make two genuine mistakes before the CEO decides your aim is more trouble than you're worth.

The animated civilians are quite amusing in certain situations - some of them will cower under newspapers at the sound of gunfire, other keen photographers will try to get snaps. As the game progresses, it's often hard to tell the innocents and the terrorists apart.

True Lies enhances Acclaim's gore reputation, with blood graphically spilt. Every time you kill an enemy, they collapse in a pool of their own plasma before doing the customary sprite shuffle off this mortal coil.

A variety of Aziz's thugs populate the overhead-viewed play areas. As you progress, their weaponry increases in power, and their intelligence improves to boot. The besuited monkeys of the first level who walk into your line of fire give way in time to snipers who hide in bushes and mad machine-gunners.

You'll be expected to solve a few not-too-taxing puzzles as you go, to allow progress.

Commonly, areas of the level need gate keys or passcards to allow access to further areas, so an element of back-tracking exists.

We give you a technicolour selection of the scenes from the film converted into cunning plan view levels. The area the game covers is really quite large.

1. It's My Party And I'll Cry If I Want To Harry gatecrashes the chateau in order to download vital information from a computer housed upstairs. After locating the data, there's little time to evade the attention of security.

2. Ski Sundae On the slopes surrounding the chateau, Harry takes to his heels as measures to prevent his escape go into full swing. It's a catch-22 scenario: tree-thick areas protect him from the attention of skiers and ski-mobiles, but slow him down, allowing the helicopter a better aim.

3. Shop 'Til You Drop A surveillance operation reveals Aziz to be hiding out in a shopping mall (Rumbelows, perchance?). Here the presence of old biddies doing their Saturday shopping makes armed exchanges very risky.

4. Flushing Operation A toilet scene set to become infamous in video game lore. First, take out the guys taking aim at the urinals, then gasp in amazement as an endless stream of terrorists arrive from the same cubicles, eager to do battle.

5. Parklife After Harry has taken to a horse, rampaged through a hotel and fallen from a huge building, we get to the really exciting part - chasing Aziz through the park. Less innocents here beyond a few tramps and Tai Chai pupils!

Games like The Chaos Engine and Smash TV have proved that blasters are also compatible with the overhead format. So it is refreshing to see a film licence as big as True Lies has been given the same treatment.

If at first the graphics appear a bit of the drab side, the gameplay does eventually shine through after a couple of minutes. What's more, the artificial intelligence of the enemy characters proves to be more sophisticated than its predecessors.

There's nothing hugely mindblowing about True Lies as a game (unlike the excessive FX of the film), but it is a nice break from the usual crop of platform shoot-'em-ups.

The overhead blaster is not a design used often for Megadrive games, despite usually working well, so True Lies is welcome in that respect. It should also get the thumbs up from sickos and gun fanatics who can see the blood spurting out of their unfortunate victims.

All this pussy-footing over violence has been thrown out with True Lies where the body-count is truly extraordinary. But despite being challenging and generally fun to play, the game's main failing is its lack of spectacle and excitement when compared to the movie.

Okay, the film had James Cameron, $50m and the best effects possible, but even so, Beam Software have chosen to skip some unforgettable sequences like the horse ride, which would have made great gameplay.

Coupled with the bland graphics, it's easy to miss the humour of the animated civilians, and the novelty of keeping them out of the line of fire.

True Lies is nowhere near the top of my shopping list... but I'm still playing it.

Graphics 71%
P. The animations of the innocent characters are quite funny.
N. The levels are fat and the graphics generally uninspiring.

Playability 81%
P. Plays better than it looks. Nice feel to the weapons and some tricky enemy tactics.
N. Pretty much the same throughout and slightly too slow.

Lastability 75%
P. Large levels, and the password system is geared to lengthening the game challenge.
N. Lack of variety is the major threat.

Value For Money 73%
N. So much of the film is missing. It often seems a tenuous link to True Lies.

Overall 79%
Plenty of murder and carnage, with a real sense of tension. But as a representation of the movie True Lies on the Megadrive it's less successful.

Plenty of murder and carnage, with a real sense of tension. But as a representation of the movie True Lies on the Megadrive it's less successful.