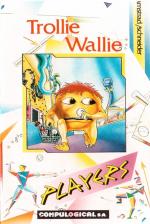 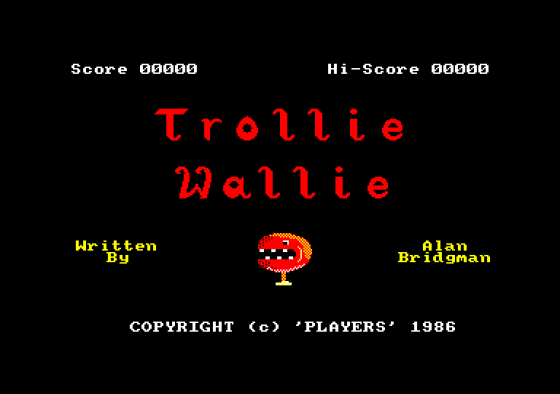 You won't find many games set in a supermarket, and fortunately our local shopping precinct doesn't have anywhere as deadly as the aisles that Wallie has to cope with. This supermarket takes the form of a large scrolling platform maze containing 40 items that need to be collected and paid for.

Wallie himself looks like a large tomato on two bright blue legs, and when he jumps he flies through the air in a graceful arc but with a complete lack of animation. His dental work is much more impressive consisting of large, toothed jaws that chomp up and down as he Walks, just like Pac-man. Wallie has to find the 40 shopping items and take them to the checkout desk five at a time.

The first problem is to find the check-out desk, but once you've located that there's a lot of tough shopping to do. As Wallie moves around the shop the screen scrolls when he gets near the edge to reveal more of the maze. The same happens when he goes up or down ladders to get between the shops different floors.

Wallie doesn't have to cope with old ladies pushing squeaky trolleys and acting like they're in a demolition derby, but he does have to deal with a mass of dangers. The main danger is fatal falls, which can happen all too easily due to the disappearing floors, conveyor belts and long jumps that have to be negotiated. Any one of these could dump him into a drop that costs a life.

Dangers come in many forms, some static and others moving. Fungus on the floors and ceilings are a constant hazard (don't shop here for food!), while somebody seems to have activated laser security systems and some nasty sliding doors before locking up time. Wallie can be stopped in his tracks by any of them and sent back to his starting position, minus another life.

The shop is also patrolled by some vicious monsters - that probably mutated from the rotting meat freezer. They move along in patterns on some floors, bringing yet more death if touched. Most of these obstacles can be avoided by carefully timed walks and jumps, but some can be very difficult to get past and will need practice.

Less lethal obstacles present themselves in the form of walls that have to be removed by flicking a switch, or conveyor belts that run the wrong way and have to be jumped along. Exploration is essential, and until you're familiar with the layout of this manic market you'll need to be very careful when scrolling at the edge of the screen.

The graphics are passable but suffer from some nasty colour clashes when Wallie passes through ladders and other areas. There's some excellent title music of a Jean-Michel Jarre track, but the in-game sound effects are simple. The game is rather old in concept but still presents a tough challenge to platform game fans.

Quite colourful in a tacky sort of way, but there's nothing very exciting about this budget trundle-'em-up. There's plenty to explore alright, but nothing to do except jump around and pick things up. Still, it's the closest we're ever going to get to a supermarket here in Somerton.

Everything's visible, but colour was one of the game's better features.

P. Large scrolling playing area.
P. Good array of obstacles and dangers.
P. Very tough trying to get all of the shopping.

The game is rather old in concept but still presents a tough challenge to platform game fans. 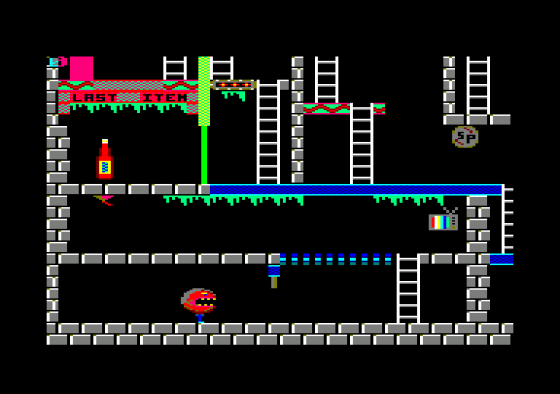