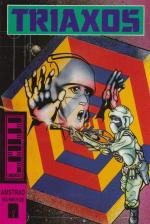 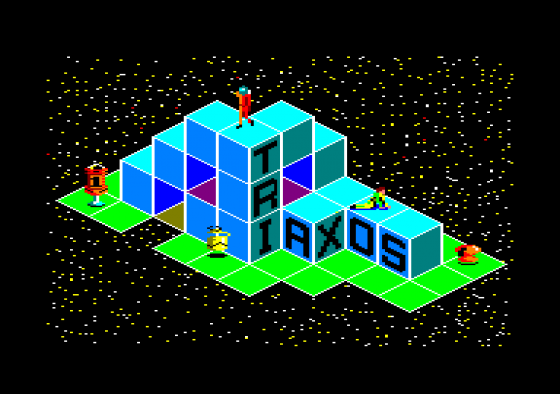 Triaxos translates as "three axes". This game takes place in a 4 x 4 x 4 cube where it's easy to get disoriented. There are 64 rooms in a 4 x 4 x 4 cube. But the game has a possible 192 locations, for each room has three faces which can be used. This seemingly confusing state of affairs is at the heart of the game and will need plenty of thought and mapping.

The cube is a prison in which you have to locate a prisoner and get him out alive. The cube is also populated by deadly robot guards and other devious defences to stop you.

Rooms are plain and empty, showing only relevant features. What you'll encounter most are doorways and robots. There are two robots on each room face. There are five levels of robot type that take the corresponding number of hits from your gun to destroy. Robots of level 2 and higher will also pursue you from adjacent rooms. 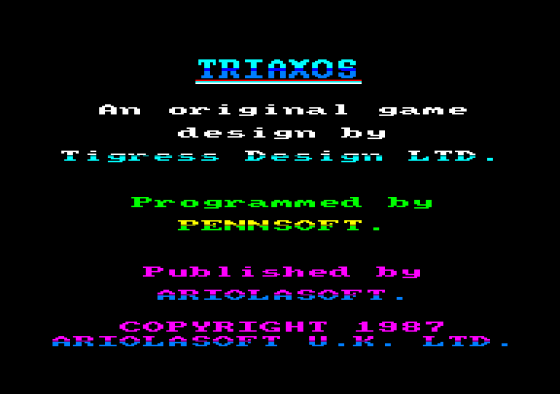 As well as your gun, which has limited ammunition, you can carry grenades and high explosives. The high explosives are particularly useful: you can use them to blow holes in the floor, which after a quick re-orientation become doors. Other objects include a jet pack, key and spacesuit which will be needed to complete your escape.

You can move through doors and drop through holes in the floor - as long as you don't drop through two floors, that is. To re-orient so that you're effectively walking on a wall, you need to find a face-lift. These are ovals in the middle of some rooms and transport you to the middle of one of the walls. You will still see yourself the right way up, but all the doors and holes will have moved.

This concept takes a bit of getting used to, but in practice it's okay as long as you remember which wall you're on and where you're headed. Mapping will be crucial to eventual success: you've got limited explosives with which to blow open holes. However, any map you can draw is also bound to be awkward, because it will need to be three-dimensional as well. 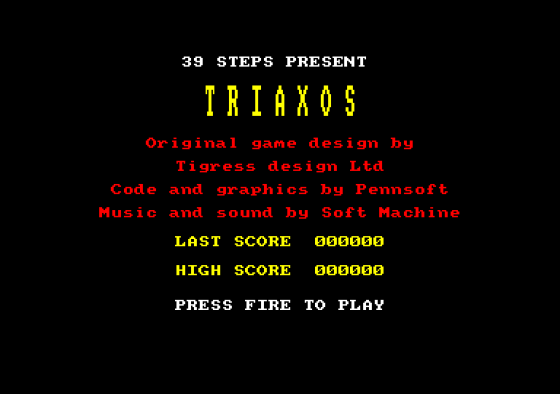 Rooms contain other structures that may come in handy. There's an energy restorer, an ammo replenisher and a cloning booth where you can create an extra life. However there are also nasty alien rooms where barriers criss-cross the floor and deplete your energy if you get trapped by them.

Although it's fairly simple in concept and not much to look at, the addiction and challenge lie in the mental dexterity that has to be used to cope with the 3D cube and its properties. You can't just rush around hoping you'll come across something; you've got to work out where you're going and how. Combine this, hordes of robot guards and a 30-minute deadline to rescue the prisoner, and you've got an excellent game.

Triaxos takes 3D games one step further. Instead of just moving from one room to another, you can also move up and down onto different planes. Can be confusing, but adds a twist to existing puzzles. Although the rooms are generally bare, the occasional robot or other object is detailed.

Graphics 68%
P. Some nice sprites and explosions.
N. Most rooms are plain.

Grab Factor 84%
P. Love the 3D cube idea and its effects on orientation.
N. A bit uneventful and confusing at first.

Overall 84%
An interesting new twist in a game that will really hook you.

Some nice sprites and explosions... Requires lots of thought and planning. 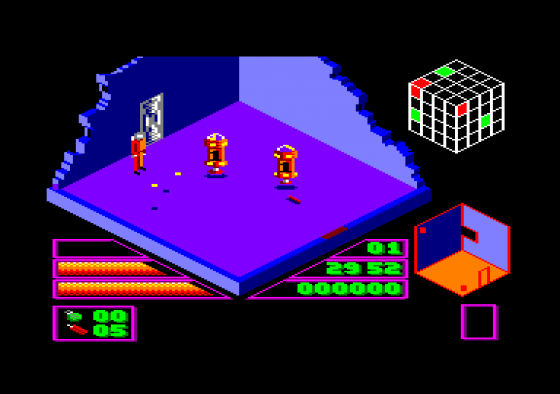