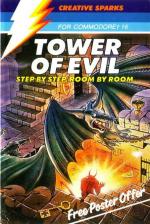 I can't award many marks for originality for this game. The insert runs through a familiar spiel describing how the hero was banished from the court of king Salimos and cannot return without recovering the king's lost treasure and the princess from the wicked necromancer. He therefore enters the multilevel tower armed with an ability to hurl fireballs to do battle with the nasties residing therein.

Each level comprises nine rooms, each occupying a full screen. In each level there are hidden a key, a pile of gold and other items which can make our hero temporarily invincible. The goodies are guarded by nasties which can be zapped and can zap you. When you have the key, you can take the transporter to the next level. Once you reach the top, you must put the gold in the chest and save the princess. You then start all over again.

Graphically it is rather unexciting. The nasties comprise of single redefined characters and the hero is rather similar to humpty-dumpty. The animation is neat but unexciting. The walls of each chamber are simple coloured blocks. Overall, the game doesn't reflect the potential of the C16's graphics. Sound is limited to footsteps and zapping noises.

The game plays quite well with equal opportunity to zap nasties or use speed to avoid them. It's not exactly tough, but the different modes of attack by each nasty make life interesting.

Other Commodore 16 Game Reviews By A.W.

Plays quite well with equal opportunity to zap nasties or use speed to avoid them... Not exactly tough, but the different modes of attack by each nasty make life interesting.