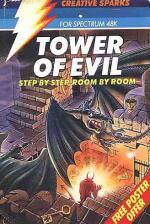 Creative Sparks is a new software company in name at least, in fact it's really Thorn EMI with a new front. They have released two new games for the Spectrum this month. Tower of Evil is a very fast arcade game not unlike Atic Atac in concept. It isn't as complex either in the graphics or the scope, but it isn't simple.

You play the hero, Andros, who has been banished from court until he recaptures the King's treasure from a wicked Necromancer and his minions. The game is played out in the Tower of Evil, which consists of five floors, each with nine rooms. There are nine treasures to be collected. Each floor contains a treasure, a key and possibly a goblet containing one of two potions, one will grant temporary invincibility and the other increases the strength of your firepower.

To get from one level to another, you must be in possession of the key. Red doors lead upwards, and blue ones go down. This is fairly important because there is a chest on the bottom floor, into which treasure must be placed if it's to be kept safe. Loss of life on a floor will mean key and treasure being lost, so it's worth going down to the chest to store it, especially as you get points for collecting treasure rather than for shooting the minions.

Between each floor there are firepits to cross. Andros must run along a floor, leap two pits, move up a level, leap two more and repeat the process on a third before emerging on a new storey of the Tower. At the same time the evil Guardian is hurling fireballs, across the pits.

Each floor has its own dangers, Beelzebubs on the first, which twitter about the place in hordes, trying to hem you in; Valfors on the second which do the same but shoot back; Xaphans on floor 3; Demi-Clones on the fourth, and flying Baphonets on the fifth. Andros is able to fire in the direction of movement. On each floor the rooms are connected by doors, which tend to be the most dangerous place to hover, since the nasties come flying through at high speed, and straight into you.

'The only drawback to this otherwise excellent new game, is the lack of sound during play. A pity since the medieval sounding tune played between games is lovely. Still, it's a small quibble, as Tower of Evil is ultra fast. The speed of the graphics is quite amazing, you can zip about the floors like a mad thing. When a nasty hits you, you explode into little bits, and then you're put together again for the next life. With each floor progressed through, life gets tougher to hang on to, especially as you face the fire pits again, and again. It's fairly simple in concept, very fast and therefore, I think, pretty addictive too.'

'Andros isn't very big, but he's quite detailed and jumps with tremendous gusto over the fire pits. These can get very difficult when there are fireballs coming from both sides. Unlike some of the earlier Thorn EMI games, this one has very sensible keys, and it needs them to cope with the speed of the game. A nice feature is that the layout of the rooms and the start locations of the treasure, key etc, change from game to game. Sometimes there are even buttresses On a room which weren't there the time before.'

'Another original game has appeared on the market, which requires co-ordination and a fair amount of luck. The aliens are not over intelligent, but you still have a good chance of getting killed, due to the fact that there's so many of them. Finding treasure and the key can be a problem as the aliens tend to pick them up, and they only come back when you re-enter the room. The graphics give the impression of being very "solid", and when you get killed, I love the explosion and the way your molecules all reform about the nucleus again. Colour is used well, but there is zero sound during the game. A highly addictive, fast game.'