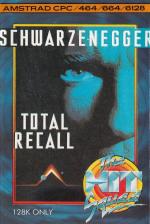 It was a dream, you know. Buy the video and fast forward to the bit where Quaid's in the implantation room at Rekall. The geeky assistant looks at the memory chip and says: "Mars with a blue sky? That's a new one." See, conclusive proof. [Write in it you know what Adam's on about - Ed]

Total Recall is one of Ocean's famous pick 'n' mix movie licences. Of the five levels, three are platform-based and the other two are racing gamelets. The first level immediately points to how classy this program is. You'd expect a platform level in a pick 'n' mix game to be fairly small with only the simplest of objectives; basically, make your way to the other end of the level.

Not so the first level of Total Recall, which is an excellent mini-game in its own right. There are five objects to be collected en route and, as well as all the running, jumping and shooting, there are various pads and levers around that have to be triggered in the right order if you're to get past the hazards. It's best described as a 'puzzly, platformy, shoot, beat and collect-'em-up'.

And there's another four levels to come! Both driving sections are horizontally-scrolling death on the freeways affairs, with more than a little similarity to each other. There's someone on your tail, lots of big trucks in the way, and you run out of fuel if you don't collect the fuel power ups you'll find scattered around.

Total Recall is basically two different games, repeated a few times (with minor adjustments) and bunged into a single box. The third and fifth levels are the same as level one, except the enemies dress differently. And that's it.

The depth of the platform elements puts this ahead of Terminator 2 at the top of the Arnie games' league table. (Red Heat comes third, well ahead of Predator, with The Running Man too crap to even qualify.)

Total Recall is not going to win any awards for originality. but it's very professionally done and great fun to play. And that's what matters, right? You bet.

Overall 90%
One of Ocean's best movie licences ever. The platform levels are a real treat. A jolly good show all round.

One of Ocean's best movie licences ever. The platform levels are a real treat and it's a jolly good show all round.