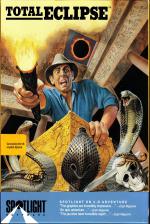 Time: 26th October 1930. STOP. Place: pyramid of the Sun-Fod Re, Egypt. STOP. You have two hours to negate an ancient curse. STOP. Fail and the world will be destroyed. MESSAGE ENDS.

Cast your mind back to an ancient time, a period when the people of Egypt built pyramids in honour of their kings and worshipped mysterious gods.

The High Priest is angry. The Egyptians are rebelling and refuse to continue carrying out their usual sacrifices to the Sun-God. Re, in retaliation, the priest sets a terrible curse upon the people of his land. The topmost chamber of a great pyramid is dedicated to Re. If anything blocks the sun's rays within daylight hours, the shrine will be destroyed and the moon will explode. The ensuing shower of meteorites will make sure that the world as we know it cannot survive.

Only one person possesses knowledge of this terrible secret. Yup, that's you. A total eclipse has been forecast and you've got to destroy the shrine at the apex of the pyramid before it occurs. Otherwise - kaput.

And this pyramid is no piece of cake, so don't go thinking it's going to be easy. To put it bluntly, unless you make a map of its various chambers, galleries and rooms hiding mysterious artefacts, you've had it. Worse still, many of the rooms contain devious and disorientating puzzles (locked doors, self-raising walls. trip wires, pressure pads) - you've only got a pretty limited supply of water and any really strenuous exercise is likely to tire out your heart. Ouf!

Certain barriers can only be dealt with by shooting (lucky you remembered to bring your revolver!) or if you've got an ankh - one of a set of mysterious symbols scattered around the area.

The action unfolds in glorious Freescape first person perspective 3D with the usual array of dead helpful controls at your fingertips. You can alter the size of your step, the angle of view, look up, look down, stand, crouch and even stop to rest.

Oh yeah - there is one advantage to being the saviour of the world: you can use part of your precious two hours to collect the treasure that some careless ancient Egyptian has left lying around, If, and when, you ever get out, you won't just have rescued the entire world - you'll be able to buy most of it as well!

Whether or not you'll like this depends on whether or not you like Freescape. However, even if you thought Driller and Dark Side were a bit slow, take a look at this, because it really is an example of a game where the initial slowness of playing is compensated for by the atmosphere of getting involved. After half an hour's play, you won't really notice the sluggish 3D - and since the action will take you a hell of a long time to complete, that's pretty good!

You really feel as if you're in the 30's exploring an ancient Egyptian pyramid - and the sharp time limit only adds to the excitement. If you want to explore a 3D world on your 64 that's better than either of its predecessors, take a look at Total Eclipse.

One way or another, I happen to have rather a lot of Egyptian blood bubbling about inside my veins, so I was really chuffed when I heard Incentive were giving Freescape an oriental theme. I'm even happier now that I've actually seen it. I mean, Driller and Dark Side were pretty fabulous and terrific but Total Eclipse is even better! Not only have you got an incredibly complex 3D environment - this time with steps and galleries which actually allow you to overlook lower levels - but you get a whole bunch of really deep and devious puzzles to solve as well.

The graphics are incredibly impressive and the eastern music really contributes to the tense and pressured atmosphere. I suppose you think I'm going to do my usual jig to celebrate. Forget that - I'd rather have another game.

I've never really gone overboard for Freescape (mainly because it always seemed a bit slow) but once I'd gotten into Total Eclipse, I was far too busy messing about with all the puzzles to worry about the speed of the game.

You may only have two hours before the total eclipse but I reckon with such an enormous pyramid to explore, in real time it'll take you months and months! All those rooms at different levels do get a bit confusing, though - so you've really got to make a map. I found the music (a repetitive eastern grating noise) a bit irritating, but the depth of the gameplay definitely makes up for it.

If you prefer games with a bit of substance, rush out and get this now.

Presentation 93%
Comes in a glossy cardboard box with quality A2 colour poster. You can save the game at any time, and there's atmospheric on-screen presentation.

Graphics 85%
Brilliant 3D, but if you haven't come across Freescape before you might find it a bit slow-moving at first.

Sound 70%
Eastern tune might grate a bit after a while; some paltry spot effects.

Hookability 80%
Freescape is a bit hard to get to grips with initially and you'll have to use the keyboard (gasp!).

Overall 94%
The most complex and captivating Freescape adventure so far.

The most complex and captivating Freescape adventure so far.