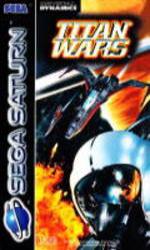 So what do aspiring actors do to break into the Hollywood limelight? Some cruise the casting couches until fame comes their way, others perform lewd acts in naughty videos, waiting for the big break. But for those 'actor/actresses' (we use the term loosely) who are going nowhere, or whose careers have been and gone, there is only one thing left to do: star in a computer game. Take that bloke who played Luke Skywalker in the Star Wars films. Where has he gone since then? Eh? A starring role in Wing Commander 3 and 4, that's where! Not exactly something to pop at the top of the old CV, is it?

And here we have the latest batch of LA wannabes, led by the babe from Babylon 5, enriching Titan Wars with their thespian turns. It's a 3D shooting game, in which the cast play the other pilots of your flight squadron. They aid you as you set out to answer a distress call from the survivor of an asteroid-core mining station, which you see being mysteriously blown up in the intro. Then, somewhere along the line, a load of enemy spacecraft decide that they don't want you to answer the call, and try to wipe you out. In true Alien tradition, it soon transpires that the distress call wasn't all it seemed...

With your team of crack fighter pilots, traverse the multiple asteroid fields and planets to destroy the enemy legion.

No shooting game would be complete without all the gratuitious weapon power-ups, so to keep up with tradition, this game has the full quota:

Throughout the game, a little TV screen appears in the bottom corner, and one of the co-pilots will tell you something they think you should know. Most of these are of no use at all, and come along the lines of "They're turning me into Swiss cheese". Other pilots sound like a German teacher with a lisp. However, others will give you bits of info on how to pass certain parts of the level and others will tell you how to kill specific baddies.

After each of the levels has been successfully completed, you are 'rewarded' with a touch more of the plot unfolding to help you get into the story. These come in the form of the previously mentioned FMV sequences, and basically show the team's involvement in the game.

After the first mission is completed, the action reverts back to your base, and instead of congratulating you on a job well done, a Captain Flash-heart type bloke tells you, "That's not the way we do it round here," and promptly gives you a bit of a lecture. And your reply? "You don't wannt piss me off!" Amazing. Let's just say we can't see any Oscars on the horizon.

Cue fanfare, and roll out the carpet as we proudly announce the Mean Machines crap Saturn game of the month. Well, someone had to win, didn't they? And this one beat all the winners hands down, due to crapness of the third degree. It's not that the game looks bad... in fact, it's OK in the graphics department, but it's from there that everything goes downhill. The speech and the sound are so bad that the actors sound like Darth Vader with a cold.

Trying to understand them is virtually impossible and they end up becoming an annoying distraction more than anything else. And then there's the ship. If you tap the direction pad in any direction then you're probably going to end up crashing into the side of the caverns, causing you to blow up. It's very annoying not being able to study the on-screen action because you're steadying your ship. Oh dear, very poor. Go away. Crap.

Crystal Dynamics are paying us a dubious favour by bringing Solar Eclipse, lock, stop and cowpat to the Saturn. The name has changed to Titan Wars, but it could just as easily be Saturn's Pants. The game is a mess, both to play and look at.

Any sense of the 3D being impressive is lost when you compare it to Panzer Dragoon, and that was last year. Playing it is a frenetic but unrewarding experience. CD have better to offer, so let's see it soon.

Graphics 73%
P. The only plus point of the game. Some nice graphical touches crop up from time to time.
N. Some of the levels are too similar to each other.

Animation 50%
N. Must have forgotten when they were programming. Never mind.

Music 54%
N. Typical 'bash it out quick' music that gets on your nerves after about five minutes.

Effects 49%
N. Speech is terrible during the game and the dubbing in the FMV bits resembles the Ferrero Rocher advert.

Playability 51%
N. Initially OK, but as the game goes on and sections get tougher it quickly becomes tedious and boring.

Lastability 50%
N. Because it's boring, you won't want to play it for long. And the levels are all too similar.

Overall 52%
A terrible game that is made worse by dodgy ship-handling and God-awful acting. One to forget in a hurry.

A terrible game that is made worse by dodgy ship-handling and God-awful acting. It's boring... and you won't want to play it for long.