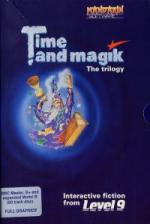 Time And Magik, at one time under contract to be published by Rainbird, has now been released by the new Mandarin Software, following a reportedly acrimonious parting of the ways between Level 9 and Rainbird.

The package is a revamped version of three of Level 9's earlier games, Lords Of Time, Red Moon and Price Of Magik. Of these, Lords Of Time is something of a classic, dating back to the days when Level 9 produced text only adventures. Red Moon won the C&VG Golden Joystick for best adventure of 1985.

Now, all of these three games have been given a facelift, with enhanced text and game features. The ST version, for example, has a facility for changing text size, for added legibility when using a TV (a feature I found almost essential) a picture cache, (to avoid unnecessary disk loads), and last command edit.

Unfortunately, with no mention in the manual of how to bring back the previous command into the input field, I was unable to use this feature, despite experimenting with many combinations of keystroke.

On the ST, the new features such as text sizing, can be used with existing copies of Knight Orc, by copying bits of both onto one disk.

All three games now have graphics on disk version, and the old graphics of Red Moon and Price Of Magik have been replaced with 'real' pictures. However, on the ST, I could not help comparing a thatched cottage in Lords Of Time, with a similar thatched cottage in Jinxter - and Jinxter won hands down.

The Level 9 graphics are far better than they used to be, but I had the constant urge to remove and polish my specs - they still give the impression they are being viewed through an obscure-glass window. On a hi-res mono monitor, though, they are much crisper.

I dug out my original BBC Micro copy of Lords Of Time, and during the six or seven minutes it took to load, I nostalgically listened to the music coming from the Beeb's speaker, once a feature of Level 9's BBC cassette. I played both versions of the game side by side for a while, and came to the conclusion that since the basic adventure had not been altered, the additional text was irrelevant, and time-wasting, and the multi-word parser redundant. After all, the puzzles are two-word puzzles, why mess around typing in whole sentences?

All three games now have graphics on disk version, and the old graphics of Red Moon and Price Of Magik have been replaced with 'real' pictures. Mind you, the puzzles remain two-word puzzles as on the old BBC, which does make the new parser largely redundant.
Logout