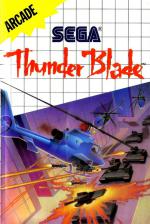 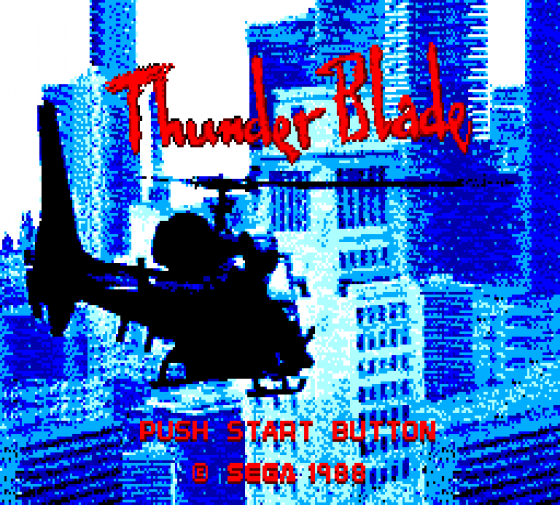 Sega coin-ops are getting better and better and their conversions to the home system are getting better and better too! Thunderblade, the hit coin-op has been converted to the Sega console format on a 256K cartridge. The coin-op relies heavily on graphics and perspective shifts; obviously the home version is limited in perspective shifts but all the playability and some really spine-tingling graphics have been S-Q-U-E-E-Z-E-D into this monster conversion!!!

The scene is set with rebel forces having invaded your country, and their plan is to overthrow the government and replace it with their own cruel and corrupt dictator (boo, hiss).

You are the finest helicopter pilot alive and go under the name Gunship Gladiator. The mission is simple: pilot the Thunderblade helicopter in a battle to the death with the advancing enemy. 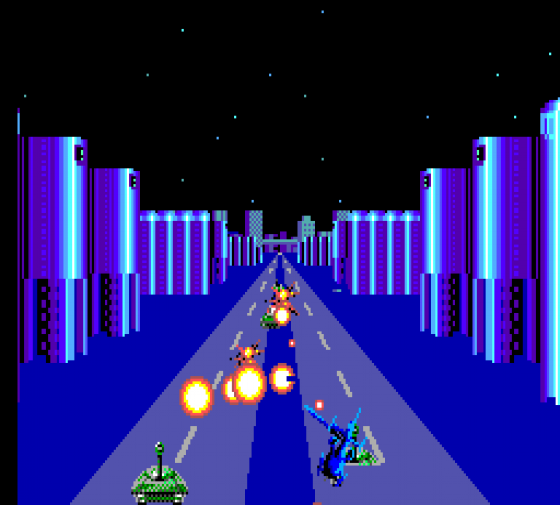 Thunderblade has four stages: Urban Combat/Mountain and Desert/River Delta and Refinery. In each stage you encounter both ground and air forces and the scenes feature vertical and horizontal scrolling. At the end of each stage you battle a Super Fortress.

Presentation is state-of-the-art. Thunderblade is a prime example with a hi-res piccy (just like the arcade!) of a helicopter flying through a city and the little etched in Blood Red across it. You start the game with three lives, and extra lives are given at 500,000 points and then every million (you have to work for these babies!).

On pressing the fire button you are shown the stage number and the number of lives, and then you enter battle. The first scene is Urban Combat (a vertical scroll) and has you blasting your way through a city high above its rooftops. The enemy take the form of jungle green helicopters who are just dying to let you have it with their machine guns and death-dealing swoops. 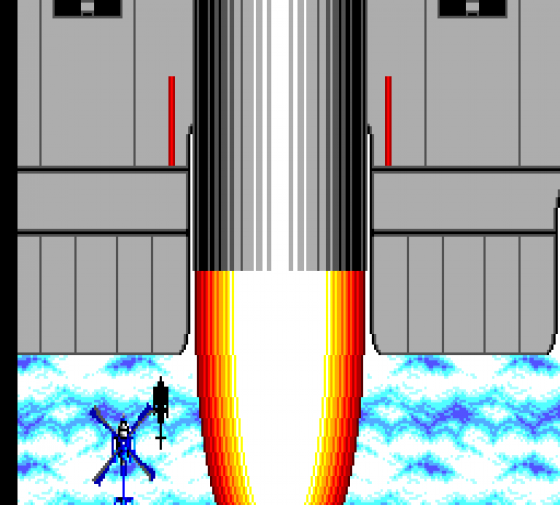 You really have to be on your toes, the action comes thick and fast and you will find yourself lunging (as I did) for the pause button to rest your tired hand - the action is incredibly hectic.

If you make it to the end of the first part you swoop up off the top of the screen and find yourself zooming down between buildings zapping formations of helicopters that approach from above, below and the sides of the screen. All the while the buildings hurtle past on either side of you. There are some good combinations here and if you are hot on the trigger you can take out whole formations and whack up the score.

The real villains here are the tanks which fire intense white missiles at you, which have a nasty habit of being very accurate. 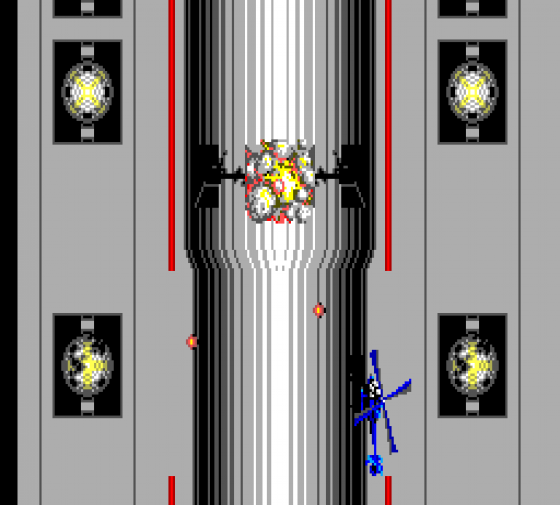 At the end of this stage you face a Super Fortress. This is a huge jet fighter with machine guns. You have to fly around it and take out the gun bases and destroy the control in the nose cone.

Stage Two has you fighting wide sweeping patterns of helicopters over a gorgeous gold-coloured mountains. The tanks below are determined to take you out, so again you need to be fast on trigger and relfexes.

If you survive these you will see a cliff face ahead with an entrance in the left side. You have to zoom down into this entrance and then quickly swerve back to the right and you are attacked by lightning fast jets.

Thunderblade rates as one of the fastest games I have ever played, and also has some of the finest graphics in any Sega game. The sound and spot effects bounce along with the action. To get the best out of this game I would recommend you invest in the start fast.

Just before you leave the cave there are a mess of tanks firing at you. Avoid these and fly out through the exit to a wide open plain again where Rapid Fire unit from Sega as this guarantees you a fast mega-blast and helps save your trigger finger.

Thunderblade is second to none as an arcade game, and this conversion gets the thumbs up...

Thunderblade is second to none as an arcade game, and this conversion gets the thumbs up. 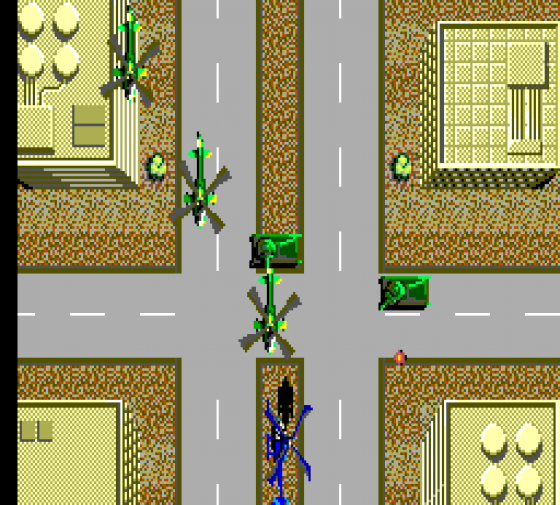 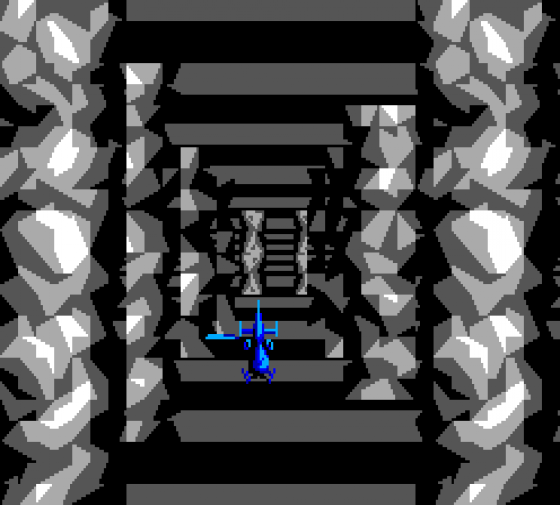 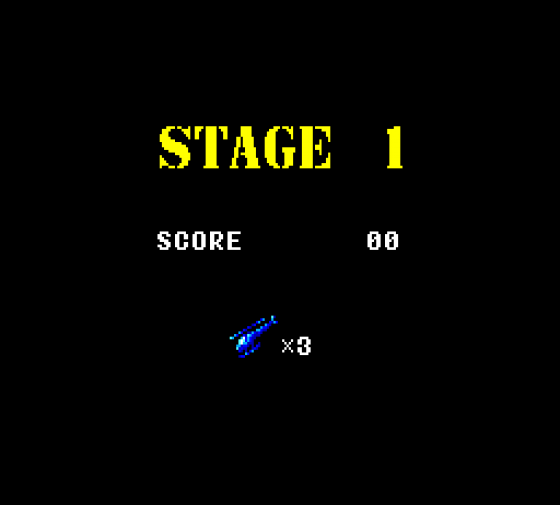 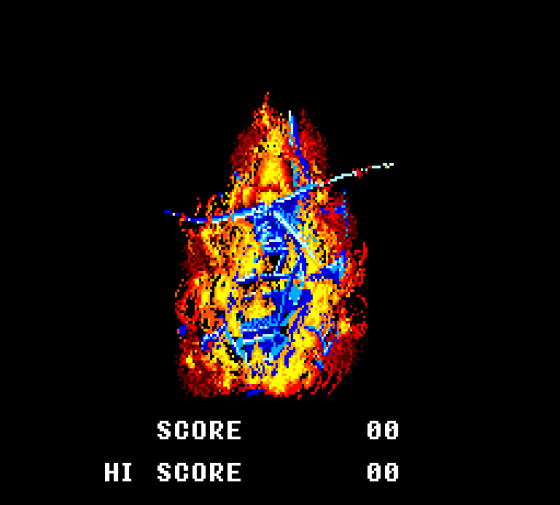