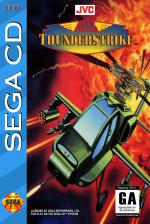 Being the worldly-wise people they are, Core Design know there are many problems requiring a solution on this planet of ours. Rather than dwell solely upon the likes of ending drug Baron's reigns, thwarting some major invasion or rescuing small villages from evil tyrants, Core's first real Mega-CD title provides the player with the tool to end it all. At the helm of the Thunderhawk - a prototype helicopter gunfire - Mega-CD owning mercenaries now storm into battle against everything and anything that moves.

Through ten assorted operations, incorporating 48 separate tasks, the Thunderhawk's pilot undertakes salvage missions and defends innocent people from exploitation in places ranging from South East Asia to frozen Alaska. Seeing as the Thunderhawk is armed with the latest in arms technology, taking the fight to the enemy is simple. Or so it seems.

Core Design already has a game named Thunderhawk available for the Amiga. This Mega-CD version is a lot different.

Take the Thunderhawk into combat through 48 different missions in ten areas of the world.

As mentioned earlier, the Thunderhawk is required to solve the problems found in ten locations worldwide. Each has its own list of prime directives. Here's a brief lowdown:

To assist in the Thunderhawk's various missions it's armed with six forms of weaponry, some of which are prototypes - just like the Thunderhawk itself.

30mm Cannon:
The Thunderhawk's standard offence. It's ace for crop busting, tree felling and taking out the odd tank.

Missiles:
Ace for taking out helicopters and aeroplanes which are much more manoeuvrable and, therefore, fall better to a swift missile up the exhaust pipe.

Rocket Pods:
The office favourite! Sear into the enemy bases and rip them to shreds!!

250lb MK-82 Bombs:
These are best used for bridge-busting exercises, though they do make a nice mess of enemy bases.

MK-54 Depth Charges: Submarines have no hope of escape when these are raining down their periscopes!

Sega's choice of Thunderhawk as their flagship Mega-CD title in America is a wise one. As fast as it is smooth, the Thunderhawk handles well and the illusion of speed as the craft is piloted through the forests and canyons is both convincing and exhilarating. Success is only guaranteed to those who have the patience and skill to fly this thing properly, assuring that no target is missed whilst also keeping the welfare of the Thunderhawk in perspective.

A strategic element enhances the gameplay and the assortment of specialist missions offer variety too. What isn't all that wide-ranging is the use of tactics. For the most part, it is possible to escape damage whilst inflicting some of your own by flying at a reasonably low level and following the directions indicated on the compass and radar.

Consequently the boredom threshold is crossed very early in the game. Thunderhawk is awesome to watch, sonically extravagant but is downed in the fun department - almost, nearly but not quite the killer I had hoped for.

Grelps! Thunderhawk is probably the most graphically impressive console game I've ever seen. The graphics are as spectacular as can be, and really put the Mega-CD to good use. The filmy intros are totally incredible and the in-game graphics follow the trend. Each level has its own colour scheme to compensate for the limited Megadrive palette, and this means there's wealth of detail. The sprites are great, especially impressive when you realise it's possible to view them from any angle at all (except from underground, of course, what with you being in a helicopter and everything).

Mind you, the old adage "it's gameplay that counts" must eventually rear its head, so what about the game? Well, the control of the chopper is excellent, allowing you plenty of scope for low-level flying, strafing, evasive action and spinning round and round on the spot until you're sick.

There's also loads of missions, with the best being the escort-the-friendly-aircraft and depth-charge dropping strategical-types. The only problem is that the more shoot-'em-up-based missions are too repetitive because there's no structure to them; you just fly around a large, open plan level shooting stuff. That said, Thunderhawk is still an excellent game and definitely worth the investment.

Presentation 91%
P. The presentation screens in Thunderhawk are very striking, though there is still the option of excluding them.
N. The mission intros grow tiresome very quickly.

Graphics 92%
P. Everybody who sees this game is completely taken aback! Every aspect of the Mega-CD's hardware is taken full advantage of and the results are outstanding!

Sound 93%
P. Again eager to make the best use of the Mega-CD, Core Design's musicians excel in the sound department with some decent progessive rock groovers.

Playability 88%
P. It's fast, challenging and enjoyable as both a mindless shoot-'em-up and strategy type infiltration affair.
N. As far as the shoot-'em-up element goes, there is danger of boredom.

Lastability 81%
P. With ten operations that include 48 missions, al of which offer a high level of challenge on the "Hard" setting, a long-lasting challenge is assured.

Overall 84%
Thunderhawk broadens the gap between cartridge and CD-based titles. It stands as a shining example of the Mega-CD's capabilities though it falls short slightly on the gameplay front.

A shining example of the Mega-CD's capabilities though it falls short slightly on the gameplay front.
Logout