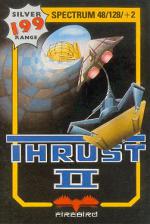 Life as a space pilot can be such a drag - and I don't mean dressing up in women's clothes! "Thrust!" they said; thrust, you did... only to find you were dragging a heavy pod after you, which did nothing for your craft's handling.

Now it's time to Thrust some more, in this sequel to one of last year's most infuriatingly addictive tests of arcade steins. Rachael tied herself in knots - driven to new heights of obscene punning - to describe the excellence of the original... which is why it's me and not the dirty minded tottie doing this review.

All is much the same in the furthest reaches of space, except that the Galactic Empire has gone one better than Barretts and is now building planets. P2112 is a des. res. with a difference - it's unfinished and hollow.

You're looking for a place for the wife, kids and soldiers of the Federal Resistance, but you're a bit miffed by the cloud of dust which keeps P2112's weather on the cloudy side. Down in the cellar lie the components for an atmosphere purification plant though. If you get them to the right place on the surface before they reach critical mass and explode, you'll have a nice back garden after all.

So it's out with the tow rope and back into a space ship which last saw life shooting Asteroids - that's to say it only boasts three controls. You can turn in either direction and thrust. Then there are two other keys, for picking up the orbs, and a fire button.

Unluckily P2112's basement has been overrun by android nasties, who can be zapped, but only if you're in possession of the right chemical agent. The stuffs scattered around the planet and it's just up to you to find it.

The other main difference from Thrust 1 is that the objects you're dragging are of different masses, so you can never be sure quite how much you'll be swung around until you've got something in tow. With 16 of the things littered on the planet surface and in the caves, there's a fair bit of work to do.

All the playability of the original remains, though the corners of the caves are, if anything, even tighter now. The graphics are slightly less abstract too. But the plot variations make this a step forward, so trust Thrust to deliver the goods!

All the playability of the original remains, though the corners of the caves are, if anything, even tighter now. The plot variations make this a step forward, so trust Thrust II to deliver the goods!