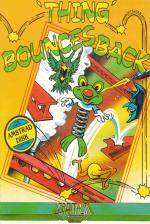 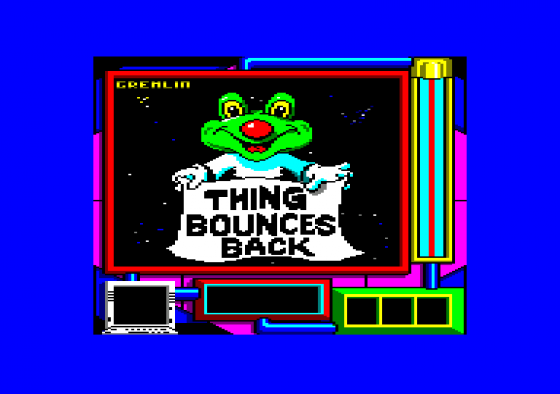 In fact Thing bounces back, forwards, straight up, down, off the walls, floor, ceiling and round the inside of your head, ending up with your eyeballs doing a great impression of a tumble-dryer. He's still the springiest character in computer games. Having dealt with the Toy Goblin, in Thing On A Spring he's got to shut down the Goblin's computer that is producing evil toys.

To shut down the computer, he has to collect bits of its program in the form of disks, tapes, roms and listing paper. These are located in eleven game areas, which are multi-directional scrolling groups of twelve screens in size. Linking the eleven areas is a maze of pipes which he you roll him along, picking up objects for points and avoiding nasties on the way.

When he emerges on one of the playing areas, Thing can get back to his springy ways and go bouncing off like a mad thing. After baddoinging wildly around for a few games you'll realise that it calls for a little thought as well. The screens are cunningly devised so that speed and accuracy are not all: you've got to choose the right routes.

You'll have a lovely time with all the transport mechanisms, if it weren't for the continual attentions of the nasty toys who attack you. There are blowers that act like lifts, conveyor belts, slides, bounce-pads, disappearing blocks, one-way valves and many more features. Best of all are the pipes: when Thing jumps into a funnel, he rolls along a pipe cartoon-style, like Sylvester Pussycat being hammered through a drainpipe.

There are also doorways: they are activated when you pass through them and then slowly close down behind you. They can cut off vital areas of a screen. So you have to go through them in the right order and direction.

The toys all behave differently, but none of them is good for you. They may sap your oil reserves, without which you lose a life, bounce you around or paralyse you. Most can be dealt with by just bouncing on them, but they'll keep coming wave after wave. Laser beams will also deplete the oil level.

All levels have lots of green squares with question-marks on them. When hit from underneath, these reveal themselves as bonus points, extra oil, an extra life or an oil depleter. After a while you'll get to know which ones to go for and which ones not.

When you want to leave an area you have to find the exit door, which takes you back to the pipe system. You can escape without finding an exit door, but it will cost you a life.

The graphics are colourfully designed and the scrolling smooth. The title tune is an adaptation of the original Thing music but even nicer to sit and listen to. I found the action an enjoyable mix of unfettered, wild spladoing-boinging and some tricky bits of screen-mapping. It's so easy to play and get hooked on, but completing it will be no easy task.

Grab Factor 84% P. Bouncing is as much fun as ever. P. Not just fast action but thought needed as well.

Staying Power 82% P. Getting all the program will be difficult. N. Tends to lose its appeal after a while.

It's so easy to play and get hooked on, but completing it will be no easy task. 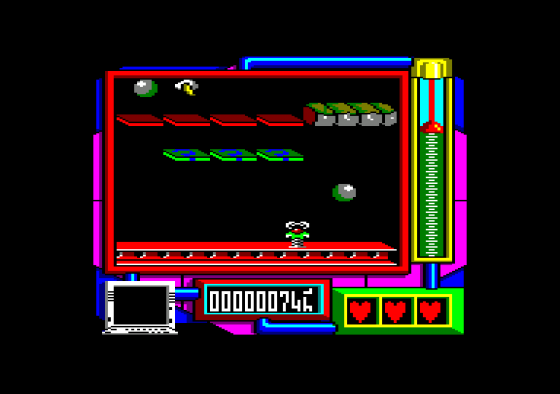