﻿ The Vindicator (The Hit Squad) Review | Your Sinclair - Everygamegoing 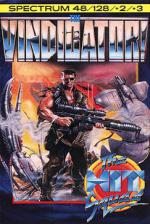 And so to Green Beret 2 (the original having come out on budget absolutely ages ago). Whether or not you relish this prospect will depend largely on your feelings about the original, another game that practically had me dislocating my joystick shaft in frustration. Luckily Vindicator is a bit more laid back (but only a bit). It's a three-part multi-loader with quite a serious problem: the first and third parts are rubbish.

Part One is a rather boring maze game where you've got to run around shooting things, finding passes and solving anagrams. Your idea of fun? I thought not. Part Two is a whole lot better. It's a slick scrolling shoot em up where you first fly a plane and then drive a tank through the usual hostile landscape. A bit simplistic, but neatly executed And then, well, Part Three. Run left and right through an enemy base of some kind using lifts to travel between levels and shooting things. Zzz. Three okayish (on average) mini-games at a bargain price. You can't really argue with that.

Three okayish (on average) mini-games at a bargain price. You can't really argue with that.