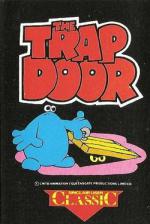 Usually licencing deals work like this: a film or TV series becomes very successful, and a software house pays several grand to use superficial elements of the plot in a software title.

Trapdoor has it all back-to-front. The game is out now and the TV show isn't screened until the autumn.

Trapdoor, the TV version, turns out to be a highly bizarre childrens' series. The plot involves a large furry monster called Berk and his attempts to feed the Thing that lives upstairs. Whilst Thing is sometimes contented with innocent pleasures like fried eggs on other occasions it demands yukky stuff like fried slimeys. The eating of unpleasant slimey and/or squidgy foods seems to be an obsessive theme in the program.

The computer game has been written for the new firm Piranha by Don Priestley (the ex-DK'Tronics Popeye and Minder programmer) and it's marvellous. So good, it actually makes me want to see the TV show.

The main characters in the game are huge sprites which are nevertheless very smoothly animated and, more amazing still, don't change colour as they move over different backgrounds. The inventive animation gives the assorted monsters a great deal of individuality. Berk really does seem slow and stupid but in a well-meaning monsterish way.

In the plot Thing gives Berk a series of tasks which must be accomplished within a time limit. Each task involves a number of separate actions, which though odd, follow a sort of bizarre logic. Trying to figure out what on earth you are supposed to do with what forms a good 50 per cent of the game. For example, when Thing asks for fried slimeys the first thing you need to discover is which of the large number of little monsters jumping and squirming around the screen are slimeys.

Trapdoor contains superb graphics with an ingenious plot. There are only half a dozen or so screens to explore but that isn't the point. This is not a game of the platforms and ladders school. In fact in the way that it requires a problem to be solved via a complex but logical series of actions reminds me of an adventure game.

That this 'adventure' features a large dopey looking monster, is based on a kids program involving cooking nasty meals may seem a major obstacle to its success. I hope not, it's the most original game I've seen for ages.

As original to play as it is to look at. Trapdoor may be one of the most imaginative games of the year.

As original to play as it is to look at. The Trap Door may be one of the most imaginative games of the year.