﻿ The Scroll Of Akbar Khan (Step One) Review | Zzap - Everygamegoing 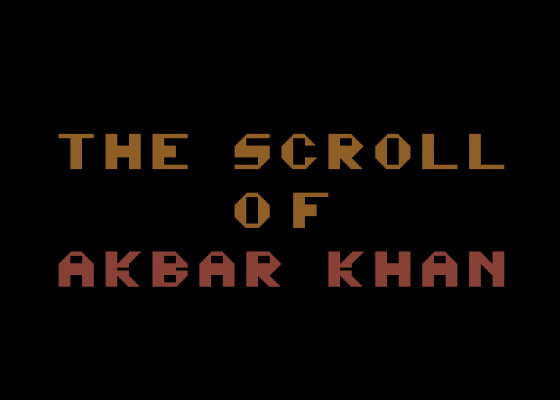 I'm always highly suspicious of adventures which don't understand the word ENTER. This one doesn't and as it was one of the first words I typed, my irritation quickly grew.

This graphics adventure from Step One has eastern overtones (as in 'oriental', gentle adventurer, and not that you should assume it has too many GO EAST commands to input). In fact, it is located in Arabia where you are set the task of stealing the scroll of Akbar Khan and escaping the city where it is kept. The reward? Something the White Wizard has known for a long time: the secret of eternal life.

The game starts, where so many adventures seem to commence, outside the walls of the city. Now were I an inexperienced Wizard, I might just consider it clever and worthwhile to investigate the exterior of the city first. But of course, I man not lacking in experience and am well aware that this is such a common ploy in many adventures - give the player the sensation that the game is set in a potentially vast space of which the city is only a part. The player is induced to think of how much he or she might miss by diving straight in through the city gates (or over the castle drawbridge or whatever), and thus roams the exterior locations, frequently with little or no success. Yet, despite my skills, I did probe without before going within. 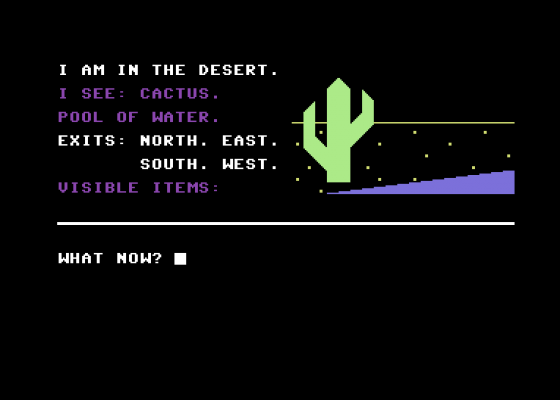 I needn't have bothered. After encountering an oasis and drinking my fill, I got stuck in one of those ridiculous infinite deserts. After wandering about for seemingly hours, my blood pressure had risen to serious levels. The infinite desert, like the wrenched maze, is a blight on adventure games, which should be concentrating on involving the player in an imagined but convincing other world and not wasting time by creating childish and silly problems like this. However, the problem was not over...

Ah! I thought, I'll start afresh and hopefully on the right foot this time. How wrong could I be, for when I attempted to quit, the program instantly displayed the prompt WOULD YOU LIKE TO LOAD A PREVIOUSLY SAVED GAME?. I certainly did not, I wanted to carry on but start a new one. So you can probably visualise my astonishment when the wrenched computer promptly NEWed itself.

Alas alack! Immortality does not always breed patience, but unlike most adventurers, I do have just a little more time on my hands to reload a game, so back to the cassette recorder. It took ages. I started again. This is when I encountered the problem with ENTER. According to this adventure it seems to be a word which is redundant. The typically American GO GATE, however, seemed to work. It isn't that Americanisms are impure in adventures, but GO used on its own is such an imperative, implying GO TO something rather than THROUGH it. The vocabulary should be friendly enough to allow sufficient variants to suit players. After all, an adventure isn't a 'guess the programmer's lack of education' game or, for that matter, a 'let's see how many useless desert locations we can fit in here to boost the sales hype'. But with GO GATE, I was soon inside the city.

After wandering about for a while, I discovered a location with a well. Hmm, I'd better look at this. EXAMINE WELL, quoth I innocently. I DON'T UNDERSTAND 'EXAMINE' came the grumpy reply. The same response occurred when I typed SEARCH. On trying to LOOK WELL, I was given a response. What sort of adventure is this I thought? It just doesn't understand good, classic English adventure vocabulary. Anyway, after taking a leisurely stroll round the other locations, I thought I'd might as well try other words to see how helpful the adventure could be. HELP should at least elicit a polite response, even if the program won't be actually helpful at any given point; don't bother here, all you get is I'M CONFUSED. This is typical of this adventure and many like it. If the program is confused, God help the player.

The graphics in The Scroll of Akbar Khan are extremely poor, they are constructed unimaginatively using the inbuilt Commodore graphics characters. The adventure itself is a boring one, lacking in depth, vocabulary and action, and really just isn't worth the money.

The adventure itself is a boring one, lacking in depth, vocabulary and action, and really just isn't worth the money. 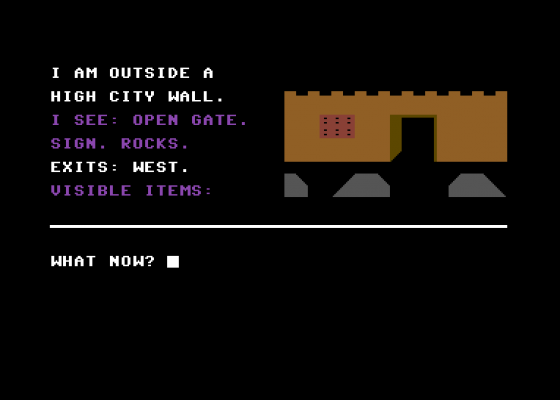 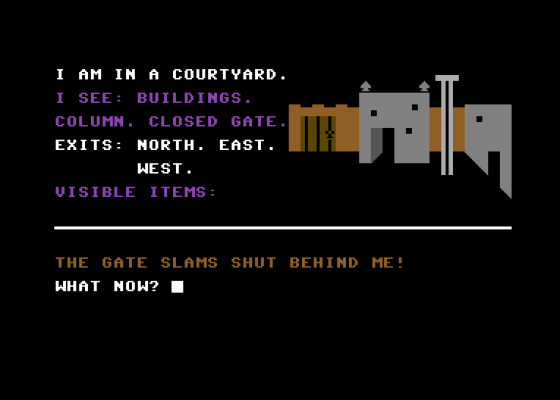