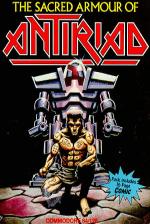 With a wave of their wand, Palace turn their pumpkin into armour. Eric Doyle tries it on.

After the holocaust in the year 2086, the world was plunged into a new Dark Age which lasted for centuries until a new, stronger and hardy race of human beings arose.

Little was let of the doomed civilisation from the distant past but one artefact survived and tantalised the new barbarian race. The document portrayed a suit of armour which, through a freak chance, became known as the "Sacred" armour of Antiriad. Centuries before it would have been recognised as an anti-radiation or anti-rad suit but a tear in the blueprint created an extra 'i' and so it was renamed.

Life was simple and peaceful for the new barbarians and the armour was not important. When raiders from the skies enslaved the people, something had to be done to break the grip of the tyrants and so it was that the search for a strong warrior began. Of all the strong young men, no-one could compare with Tal and it was he who was chosen to seek the armour and destroy the alien stronghold deep within a volcano.

Palace Software have built up a reputation for novel games that are strong on graphics but the days of the Cauldron and the pumpkin patch are well and truly gone. Now the inspiration comes from sci-fi sources, but their flair for novelty remains strong.

Like many screens before it, Antiriad has a scoreboard/console panel beneath an action screen but the approach is fresh and the graphics are a joy to the eye.

We join Tal as he leaves the meeting of the elders and enters the forest which is populated by mutant forest creatures and alien invaders. Clad only in a loincloth and armed with stones he must seek out the resting place for the body armour of the anti-rad suit. For the player this is also vital if a score is to be achieved at all. The console area is dark and lifeless because it depicts the belt of the dormant anti-rad suit which must be activated as soon as possible.

Leaping from bough to bough and running along the forest floor, Tal must be guided to the suit. Once inside the console flickers and crackles into life after centuries of dormancy. For some reason I find this part of the game absolutely fascinating. The gradual awakening of the suit is a great idea adding a touch of realism to the game with some very clever graphic tricks.

In the safety of the suit Tal can recover his drained stamina, but as yet the suit is still unusable. Its sheer weight means that Tal cannot budge from its resting place and must search out the special anti-gravity boots which will allow him to complete his mission. Forsaking the shelter of the suit, Tal has to be guided back through the forest until the boots are found.

At least life is easier now because the console displays Tal's stamina level and you have some warning when he is in danger of losing another life. Not that this is of much use unless you can get back to the suit to recover!

Once the boots, the suit and Tal are brought together the second phase of the game can be entered. Tal is totally unarmed, so his next task is to locate a weapon in the shape of a powerful pulser beam.

The suit can levitate and carry Tal into a ruined city at the foot of the volcano but he must dodge the aliens whenever possible to avoid draining the suit's energy reserves. Recharge cells can help to avoid being grounded and if the suit does run out of steam Tal can usually clamber out and bring a cell back to the suit's resting place.

For his next tasks, two more items must be collected. The first is a particle negator which prevents heavy power drains when in the vicinity of the aliens' reactors and the second is the implosion mine which will bring victory in the end. Because the mine is radioactive, the suit's safety mechanism locks Tal inside so energy must be grabbed whenever possible.

These last two items lie within the volcano itself and dragon-faced vents belch bursts of flame across Tal's path. Timing is crucial and there are still more aliens to fight.

Although Palace have tried to make this game easier to complete than their previous games, it does not constitute a Sunday outing. Finding the correct routes takes some time and many restarts before the battle is finally won.

The game was storylined and designed by illustrator Dan Malone and he has also included a small comic which tells of the events leading up to Tal's quest.

Graphically, this is one of the most sophisticated game I have seen. The scenes have a solidity and depth to them which few have attempted and the animation is thoroughly detailed.

Richard Joseph's sound effects and music form a suitable accompaniment to such a well executed game and I predict another success for Palace Software... or I'll eat my antigrav boots.

The scenes have a solidity and depth to them which few have attempted and the animation is thoroughly detailed.