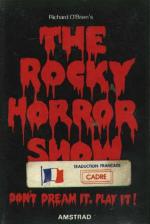 The film established a tremendous cult following and now we've got the computer game based on that unique musical. The action revolves around two cute kids called Brad and Janet who are trapped in Dr Frank N Furter's castle.

You can play either of the characters leaving your companion to be turned to stone by the medusa machine. You have to reassemble the de-medusa machine which is in 15 pieces around the house and get out before the house, a disguised spaceship, takes off!

Many of the rooms in the house are locked and have to be opened with keys. This may let out the strange inhabitants of the place. All the characters from the film are there like Riff-Raff the butler, Eddie the psychopathic biker and Rocky Horror the creation. Some of them may kill you; others steal your clothes leaving you helpless till you get them back; others just have a friendly word with you.

1. Pressure action against the time limit.
2. Wacky originality carries over from the film.
3. Good rendition of "Let's do the Time Warp.

The wacky originality carries over from the film, with a good rendition of "Let's do the Time Warp" too.