Published in Your Sinclair #65 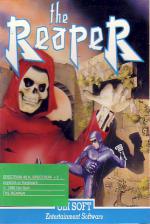 The world is full of wonderful things to do. There's cows to stroke, candyfloss to eat, flowers to pick and boys to kiss. So why have Ubisoft gone and published The Reaper?

It looks as though it's been made in somebody's bedroom (which it may well have been considering they're only releasing it on Speccy cassette) and, quite frankly, it's more than a bit of a rip-off at £10.99.

Basically it's a punch-'n'-shoot-'em-up set in a sort of upstairs-in-the-flowery-woods and downstairs -in-the-dank-caverns world. You're a brave warrior (either Lee or Karen) who's been brought back to life to fight it out with your 'reanimated' enemies (who are called things like Simon, Phil and Mike. It's better than being at an Enid Blyton convention, isn't it, Spec-chums? Except not as spooky.). At stake are the souls of your pals, so if you mess it up then you'll all burn in hell forever. Whilst setting he souls free and bashing in your old foes you come across lots of handy little items to replace lost energy and stuff as well as a while host of spooky opponents.

"Exterminate!" All that plot business makes it sound quite and the loading screens certainly add to the illusion - but don't be conned! It's all a load of twaddle!

For some reason the programmer's decided to have speech bubbles springing up all over the screen (which you can take out if you want) and these are filling by a choice of polite or, erm, 'impolite' (to put it politely) language. It's all pretty mindless and gratuitous to say the least.

Quite frankly some of our quotes are better than The Reaper. Like them, it does have a certain, erm, 'naive charm', and I did manage to have some fun with it, but you'd be mighty peeved if your forked out a tenner on it. In fact, you'd be so upset that you'd certainly explode. And as I don't want to be held responsible I'll just take the precaution of advising you not to buy it.

Amusing touches, not such amusing language. Poor and puerile.

Poor and puerile. Amusing touches, not such amusing language.