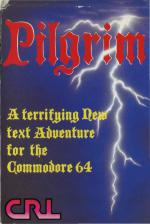 The Pilgrim is a "Quilled" game that I just caught in pre-release form before going to press. To be honest, it's a bit of a shock to see a Quilled game (without graphics) retailing at £7.95 these days. It's an even bigger shock after playing Kentilla for only £1.99, but that's the British software industry's pricing structure for you.

The plot of this little number is a bit like the curate's egg - good in parts, rotten in others. Your homeland has come under attack from the warlike Silvians who have blown everybody up and you, of course, as one of the few survivors, must wreak vengeance. So far, not so good. There must have been a dozen games with vaguely similar scenarios. However, the interesting bit is that somewhere, dozing away under a mountain, lurks The Guardian - an awesome being who will, in the darkest hour, provide help for the people of your country.

Other attractions include some imaginative use of nuclear weapons, very full location descriptions (for a "Quilled" game), and some imaginative text, all of which go towards making this a very enjoyable release (if a little overpriced).

Where the program fell down slightly, I felt, was in its overuse of The Quill's 'countdown' facility. A number of situations develop which are of the "now you've got ten moves and then if you don't do something you'll die" variety. This happened three times in the early part of the game and was somewhat tedious.

The only other annoyance is that one or two of the puzzles depend more on word-play than on logic. Confronted with a panel, for example, I felt sure that I should push it or move it somehow, but the program obstinately refused my inputs until I tried "Hit wood". Once I've worked out what to do, I like to be able to get on with it without too many vocabulary problems of this nature.

Better than a lot of text-only "Quilled" efforts, though the lengthy descriptions inevitably mean that there are fewer locations, and I'm not sure that £7.95 is the right price for this one.

Better than a lot of text-only Quilled efforts, though the lengthy descriptions inevitably mean that there are fewer locations.