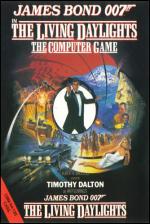 Daring and dashing, James Bond is back on the silver screen in the latest 007 epic, The Living Daylights. He's also on your monitor screens in Domark's officially licensed game of the film. Here, the player takes the role of the man with the licence to kill, battling his way through eight levels to defeat evil international arms dealer Brad Whittaker.

Each level is baased on a scene from the film and consists of a horizontally scrolling backdrop. Bond runs along this from left to right, jumping or ducking obstacles. Every so often an enemy sniper appears from behind a part of the scenery. Bond has to shoot him before he opens fire by aiming a cursor (representing Bond's Walther PPK gunsight) and pressing the Fire button. If the enemy opens fire Bond loses energy, represented by a shrinking bar. A completely diminished bar has fatal results, and one of Bond's five lives is lost.

At the beginning of each level (apart from the first, where a paint gun is automatically chosen) Bond is taken to Q's and asked to choose one weapon from the four provided - only one is of real help, so choose carefully. Bond reverts to his trusty Walther PPK if the wrong object is chosen.

The hunt for Whittaker beings in Gibraltar, where Bond is involved in an SAS training session (hence the paint guns). SAS men appear in the background, occasionally popping up over the bushes while Bond runs along to the end of the landscape.

Levels Two and Three take 007 behind the Iron Curtain. The first location is Lenin People's Music Conservatory where Bond is helping a Russian defector. Successfully negotiating this section leads to the Trans-Siberian Pipeline. This escape route presents Bond with an assault course of pipes at different heights, all of which he has to avoid to progress to the fourth level.

Back in Britain, one of Whittaker's henchmen has infiltrated the safe house where Koskov is being debriefed. He's armed with exploding milk bottles and doesn't hesitate to lob them Bond's way as he battles through the building.

After that comes a trip through a fairground. This time, explosive balloons float threateningly toward Bond. Tangiers is the nest port of call, and Bond leaps from rooftop to rooftop before reaching the penultimate level - a Russian airbase deep within occupied Afghanistan.

With more henchmen disposed of, Bond enters the final level - Whittaker's house, where a final confrontation between Bond and Whittaker takes place... if Bond destroys him, he earns the thanks of the Prime Minister.

Bond films have always been family occasions, with people queueing down the streets to get into the local cinema. Having looked at Domark's latest tie-in, it looks as though it'll be some time before such things happen at the local computer shop.

The game's plot follows the film very loosely, and requires a lot of imagination if you are to relate with the characters.

The film's main features are also lacking in the computer version - where's the Aston Martin, or Maryam d'Abo and her equally attractive co-stars? The action is very much in the Missile Command vein, but with different backgrounds in each stage to attempt to add variation to what's otherwise repetitive and boring. Which ever way you look at this, there's very little here for either the filmgoer or the optimistic games player.

This game suffers from a severe lack of imagination. It is quite a disappointment, because all it really consists of is a dull eight level horizontally scrolling Missile Command variant. Each level sticks closely to the film plot, but they all play exactly the same - run along, shoot the men, jump over an obstacle and shoot more men.

Unsurprisingly, this does not tend to raise the pulse rate. The music sounds exactly the same as any other Dave Whittaker tune, and the sound effects are just as bland. I'm sure somebody might find some fun playing The Living Daylights, but I got bored of playing Missile Command years ago.

I haven't seen the film yet, and therefore can't really comment on how strong a connection there is between it and the game. As far as it goes though, there are some parts that seem very unrealistic, such as the fact that Bond's Walther PPK has unlimited firepower, he can suffer an enormous amount of gunshot wounds before he eventually dies, and he even has five lives!

It does seem a pity that there's so little variation between levels (short of graphical differences), and the game soon becomes a recurring case of deja vu.

Sound 49%
Unremarkable ditty with no relation to the Bond theme, complemented by barely average spot effects.

Lastability 43%
The unchanging action doesn't hold the attention for long.

Overall 57%
An uninspired and slightly repetitive Missile Command variant. Not what you'd expect from an officially licensed James Bond game.

An uninspired and slightly repetitive Missile Command variant. Not what you'd expect from an officially licensed James Bond game.