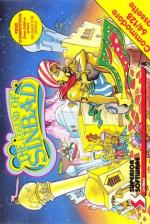 Many, many years ago in the golden age of Caliph Al-Rashid, there lived a dashing young sailor called Sinbad. There have been many stories told of his adventures, in books, on television, and in the cinema. There have even been computer games allowing you to take part in those adventures. Now, we have another version of his story, courtesy of Superior Software's latest release.

Sinbad has got himself into a bit of a fix. He's been kidnapped and thrown into the deep, dark dungeons of the evil Sultan Salabim. You must take control of Sinbad and guide him to safety, a task which involves going through several screens of arcade action.

The game starts with you locked in the Sultan's maze-like dungeon. To escape from the prison you must first collect two keys, then unlock the two hefty padlocks securing the door. The big problem is that the keys are held under a magic spell which can only be broken if eight pieces of treasure are collected. Hazards are in the form of magic gates which flash on and off, and guards which kill on contact.

Luckily, you can shoot at the guards, although only horizontally. If you manage to escape from the prison, you have to make your way through the upper rooms of the fortress to freedom, Here the action takes the form of a platform game in which you must leap around a screen killing as many guards as possible. If a guard hits you four times, then one of your five lives is taken. The captain of the guards, recognizable by his shiny green helmet, is a bit meaner and only has to touch you once to take a life. When you've managed to kill all the guards you are transported to the next screen.

Here, you have managed to steal a train of camels and must ensure their safe passage through the desert. Unfortunately, the Sultan has learned of your escape and is using his magic to fire objects at your train. Using a crosshair sight and anti-magic bursts of power, you must shoot the evil projectiles out of the sky before they hit your dromedaries.

If you manage to get your camels through the barrage of flying doobries, then you leap aboard a handy magic carpet and prepare to meet the now-enraged Sultan in a deadly final conflict. First, he sends his pets to do battle, the giant fire spitting Roc birds. If this wasn't bad enough, he also lobs his troop of elite magic carpet riding guards into the fray. Luckily, you've still got your anti-magic gun and can shoot bursts of power at the marauding meanies.

If you manage to beat off the attack, the Sultan gets really peeved and throws such a wobbly that he turns himself into a fat dragon. This ten-ton fire-breathing lump of reptile is really nasty, and it takes fifteen hits of anti-magic to bring it down. If you are able to get the correct amount of shots on target, then you have beaten the Sultan and a large number of bonus points are awarded.

After completing each section of the game, you are given a password which you can type in whenever you load the program, thus eliminating the need of going through the same screens every time.

This program is effectively four games in one - a Tutankhamun variant, a platform game, a Missile Command variant and a shoot-'em-up.

They're all quite playable and addictive, and will certainly take a fair bit of cracking. The graphics vary from quite good to rather poor, and the sound is very pleasant with different tunes for each screen.

The whole program is very well presented and offers quite good value for money if you're interested in this sort of thing.

I have seen so many variations on this theme that I am rapidly getting bored with the whole thing. There are far too many frustrating elements within this game to make it worthwhile or enjoyable - especially in the Tutankhamun section which seems remarkably unplayable. For example: when you attempt to go through a passage guarded by the pulsators, your timing has to be so precise that it makes the whole thing too tedious to play.

This game might appeal to some, but it does very little for me.

There are many unoriginal and derivative elements within this game. all of them old, tried and tested, and dull. The camel in the Missile Command variant is animated like the main sprite in Revenge Of The Mutant Camels, and I'm sure that I've heard most of the soundtracks before in Tales Of The Arabian Nights.

As for the four 'games' ... well, with the exception of the Tutankhamun variant - which is frustrating but quite playable - they're all rather repetitive and boring to play. Sinbad isn't awful, but it's overpriced for what it offers.

Presentation 89%
The program tells the story as you progress from screen to screen, and there's a useful option which allows you to skip levels.

Graphics 61%
Vary on the different screens, but overall they're quite jolly.

Hookability 62%
Simple gameplay and objectives make the game easy enough to get into.

Lastability 59%
All the screens are fairly difficult, but you can always skip them once you've completed them.

Value For Money 59%
Four reasonable games in one, offering good value - if you're interested.

Overall 60%
Not a brilliant game, but it's playable and the four screens are varied.

The four games, with the exception of the Tutankhamun variant - which is frustrating but quite playable - are all rather repetitive and boring to play.