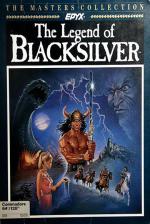 The Legend Of Blacksilver

Being a cosmopolitan sort of troll, I've met quite a few monsters in my time - dragons, orcs (phwoar! do they stink), gnomes, Maff Evans, serpents, you know the sort of thing. A real society bloke, me. Still, I've got to hand it to you - I've never met anything as disgusting as a Screaming Nug, a Brain Spate or a Bowel Root. Bleuch!

You meet a lot of those sort of creatures when you're the only peasant on the planet Bantross brave enough to save the world. Oh yeah, that's your mission: that nefarious, nasty, boil-ridden wicked person, Baron Taragas, has found Blacksilver (magic with the power to destroy) and is planning to use it against the cute, gorgeous, wonderful, beautiful Princess Aylea, guardian of peace. Trust those spoilsports at Epyx not to let you fight for the Baron - no, they have to go and force you to play for the icky, goody-two-shoes Princess instead. I ask you. Yeuch!

First things first: you've got to look for Aylea's brother and hand over the token she left you in a dream. Off you go then through an overhead view landscape (Ultima-style) pulping monsters and visiting castles, 3D dungeons (eventually) and towns. If you've got the dosh you can get rid of most of it at equipment stores, magic stalls and gambling shops (phwoar!). Sometimes you can even get into a bit of extra money by working for a villager for a day, but you've got to be careful not to make enemies. Collaborate with prisoners or fail to pay your debts and - kaput! Goodnight Josephine.

All possible actions are always displayed on the screen: if you pick speaking or fighting options, you've got several further choices still. Not as involved as some of the Ultima games, but still pretty deep.

There's a wagon full of puzzles as well, with plenty to get you thinking right from the word go. If you ever make it to the dungeons, it'll take longer than yer average gnome, feast before you leave!

Graphics (except for the dead atmospheric dungeons) aren't mega-spectacular, and neither is the sound (well, is it ever in an RPG?) but boy, does the gameplay make up for it. I'm still convinced that nothing quite beats the Ultima series, but with loads of puzzles, a really huge environment to explore and plenty of different monsters, you'd be stark, staring mad if you didn't sell your grandmother, trade in your Valentine or stick your brother in a bucket of slime to give this a go.

The low-down is this: if you want something to really take your mind off those damp, depressing billy-goat less nights, singing miserable songs about lizards to yourself, or if you're just after a dead cool game, get hold of a copy of this - it's a lot better than a poke in the eye with a pointed stick.

The Legend Of Blacksilver