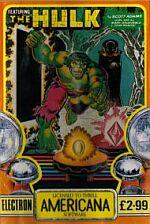 Bruce Banner was a thin bespectacled nuclear physicist, working on a government research project until one day his assistant (really an enemy agent) detonated the new gamma bomb while Banner was in range. Unbelievably Banner didn't die. Instead he became "the Incredible Hulk" - hero of the Marvel comics.

The Hulk retains the bespectabled appearance of Banner unless he becomes really angry when he mutates into the Hulk. While the Hulk, Banner is perhaps the strongest mortal to walk the earth. His green skin can withstand great extremes in temperature as well as hits without puncture or pain.

The Hulk (the game) was first released by its author Scott Adams about two years ago as the first of the twelve Questprobe adventures in which our hero must meet the strange Chief Examiner.

As soon as I loaded in the game the memories came flooding back. I remember how long it took to get out of the first location so I'm glad to see that the solution is now included in the instructions as an example of the hints book that you can buy.

The important thing to remember when playing this or any other Questprobe game is the powers and abilities of your character as well as those you meet.

In The Hulk, you will meet the friendly Dr. Strange a master of magic, a particularly nasty robot called Ultron, a malevolent entity known as Nightmare and the Chief Examiner himself.

The adventure itself is a mixture of two word text commands and superb graphics some of which are shown here. My favourite being the transformation from Bruce Banner to the Incredible Hulk.

The game is difficult but all the problems do have logical answers, although they may take hours to solve.

I still think that The Hulk is the best of the "Questprobe" games, probably because the Hulk has simple powers in that he's tough and strong and anything he hits - stays hit. Now the game has been included in the Americana range it is exceptional value for money.

The best of the "Questprobe" games.