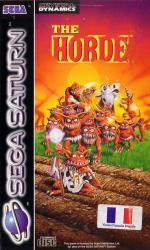 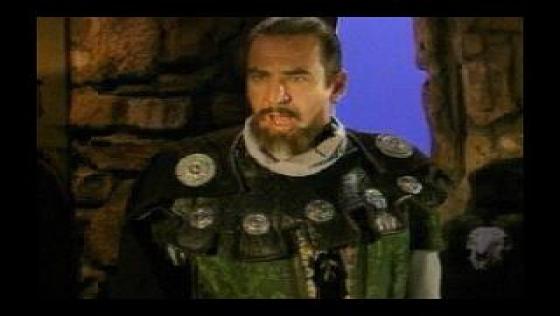 Stereotypical peasants, an evil sheriff and a gullible king. The king spoils himself by going through life eating feasts, and ordering people about, while the sheriff makes it his duty to order the king about. If this isn't the perfect opportunity for us to once again mock the appalling acting of hammy old thespians (gleefully nothing the 'uncanny' resemblances to members of the MM team) we don't know what it.

You are the king's servant, and are serving up some grub at a big nosh up held in the curiously pokey banqueting hall. Amidst all the hilarity, you're the only person to realise that the king is choking on his food. Being the decent bloke that you are, you rush to his aid and make him spit out the contents of his clogged throat.

The evil sheriff, however, is not best pleased at your heroism and promptly tries to throw you in the slammer. The king is having none of this though, and pulls you back, exclaiming you're a national hero for saving his life. He knights you there and then. Your first task as a knight of the realm is to guard the village and protect it from 'the Horde'. Ho hum. 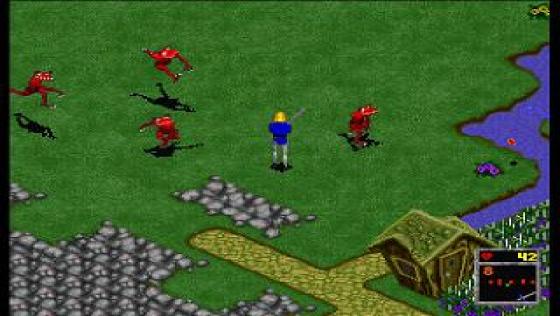 It's programmed by kings of the 3DO, Crystal Dynamics, who initially produced this game for the system.

Set up a thriving community, earn some cash, and protect your little village from the attacks of the Horde.

If you manage to stay in credit with the tax man, and keep yourself and the community alive, you'll be rewarded with a trip to Le Shoppe (The medieval version of WHSmith). Numerous items are available to purchase at this first shop, all of which will aid you in one form or another. 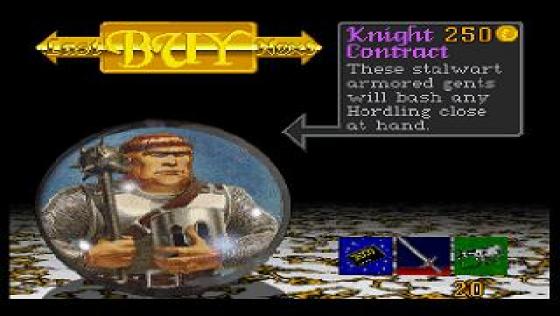 1. Haunt Secret Recipe It costs 50 crowns to buy, and only five to use, a piece of disease-ridden, mad cow-infested meat. It attracts the Horde, taking their concentration away from the town, giving you a chance to collar them. It only takes them around five seconds to eat the stuff, so be quick.

2. Ring Of Teleportation Speaks for itself, this. You know the Star Trek Transporter Room? Well this is the same thing, only you wear it on your finger. Beameth me up ye olde Scottie. Most expensive item at 300 gold crowns.

3. Le Bombe Apparently, this is the latest device from overseas, and it packs a hefty punch. This one weighs in at an overdraft-bulging 250 gold crowns, so use these wisely. unless you can poo money. 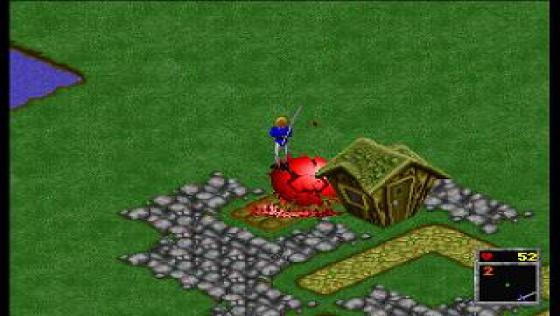 4. Knight Contract This is more like it. Hire a few rock 'ard bodyguards who duff the crap out of any Hordlings who happen to get in your way. These blokes mean business, so they are definitely worth getting a measly (!) 250 big ones.

Of course, there are other ways to make some cash, and the most profitable of those is by looking after your crops. They expand and grow of their own accord, meaning that all you have to do is tend to them with a bit of loving care.

The most effective way of doing this is to build spikes around them, but this does tend to waste a bit of money. For every patch of field that you manage to keep secure, there is a 20 crown reward. The only bummer to this is that the Hordlings only have to walk over a bit of crop to destroy it. 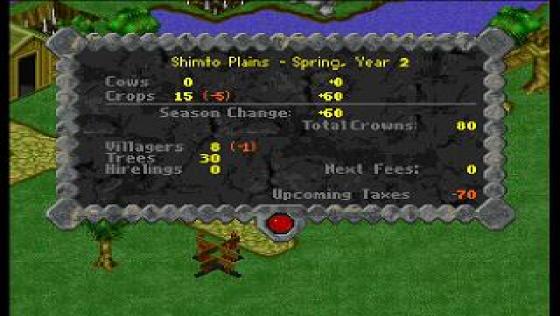 The fences may be pretty soon, but they don't keep out the Hordlings for long enough, so stop all the messing about and slap in a proper brick wall for more protection than an Always Ultra. Even one with wings.

If green fingers and getting dirt under your nails is your type of thing then this game might be for you. You begin with 25 gold crowns and a bunch of available options. Each of these costs money though, so they have to be used accordingly.

1. Dig For every grown tree you dig up, you get five crowns for your troubles. You can also dig up small patches of water, and any old fences and small obstacles that may be getting in your way. Be warned however, as all the non money-spinning items you dig up will cost you 10 gold crowns. 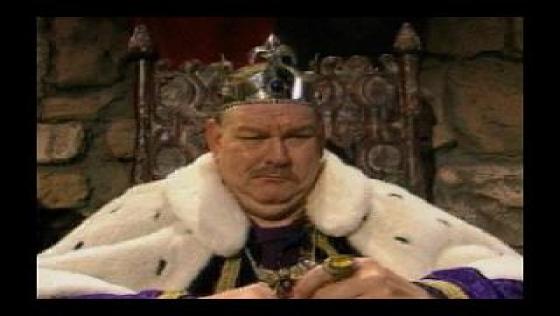 2. Spikes Of all the things you start with, this is the best for protecting the houses and so forth. Placing some of these around any cows or buildings will disintegrate any Hordlings foolish enough to step on them. They do disappear once trodden on, however, and they'll set you back 10 crowns.

3. Cows These are a sound investment, as for every Horde invasion you manage to survive, 25 crowns will head your way. It's best to put these in the centre of the village or where they are less likely to succumb to any attack. They are a costly loss if killed early on.

4. Fence Quite cheap at five crowns per length, but you get what you pay for, and what you get here is crap. They manage to delay the advancing Horde for all of three seconds before they break through and attack anything in their way. Mainly for aesthetic pleasure!

5. Trees These are the main source of income when you first start, so should be treated with due care and attention. To plant a tree only costs a single crown, yet if you dig up a fully grown tree you'll acquire five for your troubles. The more you can plant, obviously the more cash you can make.

6. Call Horde This is most used when you've spent all your hard-earned and are just waiting for the Horde to arrive. If this is the case, select this, and the rest of the timer will instantly disappear and the Arrrrooooo! will signal the beginning of an invasion. This costs nothing, as it could be potentially harmful to you.

At the end of every year, taxes have to be paid, in order to keep you out of the nick. Failure to meet with these deadlines without the required sum of money causes an instant 'game over'. However, the game does throw up a few surprises.

At certain points, the game selects a random effect to throw in a bit more variation on the proceedings. Sometimes, the tax collectors go missing and therefore you've no need to pay any, and other times the local magician casts his flood spell because of a drought warning and your village suddenly is overcome by miniature lakes.

Prior warning of all of this is brought to you in the form of tacky FMV screens.

Strange old bird, this. On the one side, there is a pretty in-depth game, which, when you know exactly what you're meant to be doing, can be pretty addictive. The enticement of buying all the mod cons to progress further works well, and the bodyguards are particularly funny if you can get them to work in the right places.

But The Horde's strongest feature for me is the depth. Everyone who has been bothered to play this for longer than the standard 20 minutes-this-is-crap-turn-it-off period will find that there is a good game underneath here trying to get out.

The initial problem is working out what you are supposed to be doing. It's not so much that the controls are the problem, it's more to do with the actual planning and the building of the town.

I didn't realise at first that, like the cows and the crops, the trees give you money. But, once the initial year is negotiated, the rest of the game becomes quite compelling. I can't see everyone going for this, and it's definitely not a classic game, but I feel it is well worth a look if you have the patience.

The Horde is Crystal Dynamics best game of the last couple of years, and works far better on the Sega Saturn than Solar Eclipse or Gex. The game's strengths are its originality and depth. The mixture of short action sequences and pretty involved strategic planning periods make it play like a Sim City... with balls.

The whole affair centres around money rather than lives, and the player feels totally free to make spending decisions to add another couple of crowns to his coffers. The interaction between the two distinct gameplay sections is neat - as a player gets more proficient at killing the Horde, he can spend less on defences.

To spice up what can ultimately become a bit repetitive, there's all manner of random occurences, brought to you by a newsreader, which force you to be less complacent. The game's greeny appearance speaks for itself, but The Horde is far more attractive than its visuals let on.

Graphics 88%
P. They may look fairly basic at first, but the village is actually quite detailed. N. Didn't need the crappy FMV really.

Animation 89%
P. The men, cows and Hordlings are all surprisingly well done, and actually look like time and effort has been spent on them.

Music 79%
N. One in-game banjo ditty, and it's extremely annoying. Not at all good.

Overall 86%
Not as instantly appealing as we'd like, and the goldfish among you will hate it. However, just scratch away the surface...

Give this game time and you'll be reaping the benefits. Don't give it time, and you'll (unwisely) discard it. 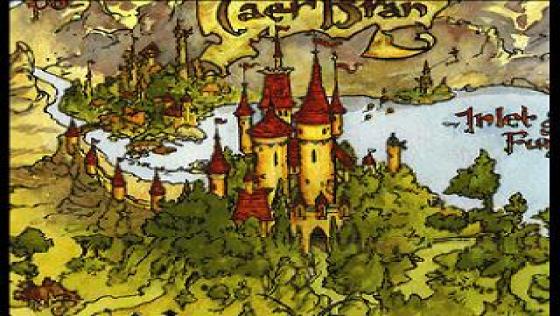