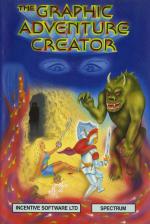 Incentive's excellent adventure creator utility, released originally for the Amstrad, has made its promised appearance on the Spectrum. A conversion of Sean Ellis's original program, by Brendan Kelly, this has the same easy editing facilities.

The Spectrum, of course, is quite a different beast from the Amstrad, but within the constraints of the machine, this version faithfully reproduces the original.

A graphic creator option is included, and uses a similar method to that of its predecessor. As before, the game can be play-tested from within the program, and includes a debugging aid.

A Quickstart file can be loaded, which sets up common verbs, messages, and low priority conditions associated with them. Two demonstration adventures are recorded on the reverse of the tape, one of which can be used to practise editing.

Up to 9,999 locations can be created, and filled with up to 255 objects, 255 is also the maximum limit for verbs, nouns, adverbs, and markers, whilst up to 127 counters holding a maximum value of 255 can be used.

The actual number and mix of each of these achieveable in practice is, of course, determined by the memory limit of the machine. Free memory is constantly monitored on the main menu, and powers up at 23,194 bytes.

Commodore 64 owners have yet to see the release of their version, but it is well on its way.

A conversion of Sean Ellis's original program, by Brendan Kelly, this has the same easy editing facilities. This version faithfully reproduces the original.