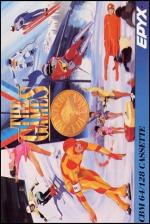 Once selections are made, a name and one of 17 available countries are chosen. The first event is the Luge, a death-defying sport which places the competitor on a tin tray hurtling down a mountainside course. Four tracks are on offer, the aim being to score as many points as possible by completing the course in the shortest time. Three meters at the bottom of the screen assist swift movement: steer, drift and position.

Next is the Cross Country race, with a choice of 1km, 2km, or 5km courses against a human or computer opponent; rhythm, as with many Epyx sports games, is the key here. Following this is Figure skating - the only event which doesn't depend on brute force and ignorance! The first task is to select the piece of music for the performance, and then choreograph a routine of up to 14 moves, depending on the length of the piece. To attain a top score you must have selected at least one of each of the eight different moves, and perform at least ten moves throughout the performance. At the end, the judges award appropriate points for technical and artistic merit.

Three skiing events are featured (apart from the Cross Country): Downhill, Slalom and Ski Jumping. In Downhill and Slalom you hurtle down snowy slopes whilst avoiding gates strategically placed along the route. Ski jumping sees the competitor leaping from a huge ramp: speed is not necessarily of the essence, although concentration and distance are. Correct posture on the ramp and in the air (coupled with a safe landing!) all add up to a medal winning performance.

Finally we come to Speed Skating: four tracks are on offer: 1000m, 3000m, 5000m, and finally 10,000m. Again, rhythm is the key to success, since lack of co-ordination will find the player flat on his back and his opponent at the winning post.

At the end of each event, if successful, the medal ceremonies, the winning country's flag and a rendition of their national anthem are all displayed.

From the classy opening ceremony to the scintillating finale, The Games' marvellous presentation makes it unmistakably a product of the Epyx stable. Unlike its predecessors, however, this addition to the series isn't likely to win the solid gold approval of armchair athletes quite so readily. Yes, the superbly designed and animated graphics are there as ever, but gameplay - where has that gone?

Many of the sports are excruciatingly difficult to complete and, even when following the instructions to the letter, the program always seems to expect supernatural intuition; in some events, the loading sequence is longer than the action, even on disk!!

I'm sure that sport aim fans will love The Games; personally, I'm not that keen on sports whether the physical or armchair computer type, so I wasn't really interested - at first. However, after a few attempts I found that even I enjoyed it, although a lot of practice is needed to perfect the skills required to earn the much coveted gold medals.

Graphically the game is good, with some nice character animation, especially on the figure skating, although I found that on most of my attempts the poor girl ended up on her backside! If, after the deluge of other sports games from the Epyx stable, you're still keen on this kind of game, check it out.

Maybe it's just because we've come to expect so much from them over the past few years, but this effort makes you wonder if the Epyx bubble has finally burst. All the events are good, but they're not quite brilliant - there's definitely nothing as outstanding as the sumo wrestling in World Games or the surfing in California Games.

Graphically, it's as good as we've come to expect, with some smart animated sequences; but each event is marred by small annoyances. The Luge is made awkward by the rapid flick-screen action, the figure skating includes a technically impressive but slightly dull choreography section and the cross country skiing is simplistic. That said, all events are beautifully presented (as usual) and the slalom, downhill and speed skating are great.

It's well worth a look, but don't be surprised if you're a little disappointed.

Graphics 85%
Smooth character animation, but the sprites are a little chunky at times, generally very good.

Sound 80%
The usual high quality and wide variety of jingles and sound effects.

Hookability 70%
A greater than usual need to practise may deter first time players, but it won't bother the veterans.

Lastability 88%
The seven events, multiple player options and a desire to beat the records and win medals make it ultimately attractive.

Overall 76%
Well worth a look-but there was plenty of disagreement in the reviewing team, so don't expect too much...

Many of the sports are excruciatingly difficult to complete and expect supernatural intuition.