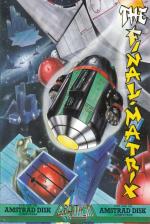 Nimrod's the name of the new character from Gremlin, and if Gremlin follows past patterns you can expect to see him pop up in more games. Nimrod is a Biopton - a mechanical lifeform - who has to rescue other Bioptons from the clutches of the Cratons. This means he has to enter the Matrix and find the hostage in each of the Matrix locations.

You can choose which location to land in and beam Nimrod down to it. Each location is a maze of rooms, corridors and walls that cover several screens. They're in 3D and you see them from an unusual overhead angle. They're quite detailed, like most of the characters that inhabit them, but lack colour and variety.

Finding each of the hostages isn't easy. Getting them out is even tougher. You're armed with one of four devices: three types of weapon and a thrustpak. The thrustpak allows you to fly over things but has limited fuel and can't be used by the hostage for a return journey. The weapons, in increasing order of strength, are a lazatron, megatron and megabolt.

The weapons come with limited ammo but the stronger ones are useful for dealing with Craton guards. It will take a number of hits with any of the weapons to destroy a guard robot. Even a megabolt uses up half a clip.

The robots have different effects. Some will shoot at you, weakening your strength; others just try to push you around. Worst of all are the mines, which are instantly fatal if you bump them. There are also squares on the floor which can sap energy or bounce you about.

Things aren't all bad. There are refuelling squares. TV monitors that let you study a map of the location, bounce lifts to take you up steps and other handy construction blocks. This is where the puzzle element of the game comes in, particularly when you've found a hostage.

Hostages will follow you around, but guiding them up steps and over other obstacles isn't easy. You've got to make it back to your start square to lift off back to your ship. All the hostages have to be rescued within a time limit - tough.

It's a nice idea for a puzzle-arcade game, and it's quite well carried off. My reservation is that it's rather difficult to get into and not too rewarding of good efforts. However, it will present an excellent long-term challenge.

Enter Nimrod, Gremlin's new character - not as cute as those who have gone before, but guaranteed to help you our of sticky situations. Matrix is tough to play - there are so many dangers early on that it takes a strong will to continue playing.

Staying Power 74%
P. Excellent mixture of action and puzzles.
P. Many locations and all tough.

Overall 68%
P. Could be an excellent new series.

A nice idea for a puzzle-arcade game, and it's quite well carried off... Will certainly present an excellent long-term challenge.