Published in The Micro User 2.12 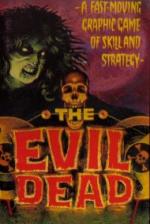 Having been a horror movie fan since seeing my first black and white Frankenstein film, I was intrigued to see how well such a movie could be converted into a computer game.

The story line of The Evil Dead from Palace Software is described at length.

In a nutshell the story is as follows: Ashley, the hero, and four friends are on holiday in an old shack which just happens to be haunted.

Whilst exploring the shack they discover the book of the evil dead, and by reading from the book they summon up an evil spirit. The windows of the shack fly open and the spirit enters the rooms causing all except Ashley to mutate.

Using an assortment of weapons Ashley attacks and dismembers the mutants. But your common or garden mutant doesn't give up that easily.

The disembodied limbs are soon back on the trail of our axe wielding hero. Now that's what you call a story line.

The shack is viewed from above in the form of a floor plan, architects' style. The actual playing area is spread over three screens which was the first of the programs failings.

As you approached the edge of the screen everything stopped moving and the whole screen scrolled to one side revealing more of the shack.

A Defender style scrolling action would have been far less irritating.

One of Ashley's tasks is to race around the shack closing the continually opening win dows to keep out the evil spirit. Points are awarded for every window closed.

However window closing is soon forgotten as the friends - or is it fiends? - begin to mutate.

Whether you were attacking a mutant, or vice versa, the result of the encounter was the same - the program merely printed a brightly coloured flash at the side of the character.

It was therefore very difficult to tell who was attacking who. All in all, I was not too impressed.

As they say in the movie business, you've read the book. you've seen the film, but don't rush out to buy the program.

All in all, I was not too impressed.