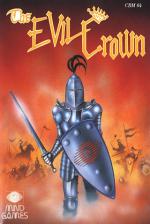 If you missed last month's preview then never fear - the real thing is here. The Evil Crown is a one-player game about running a Barony in feudal medieval England. It's an icon driven game which allows the modification of various factors surrounding the running of your estate. Apart from the now fashionable use of icons, the game employs some animated sequences (to depict battles and revolts) and a redesigned character set adds atmosphere to the game.

The main screen is split into two halves. On the left is an overhead view of the fields worked on by the peasantry. The cultivated areas are highlighted against the forest region. If the harvests are not too good, it's possible to select new areas for farming, using an arrow cursor. To the right of the screen are nine main icons which allow you to alter the tax rate, alter the toll rate for passing traders, pay scutage to the King (to avoid having to send your militia into battle for him), modify the size of the militia, give food hand outs (if the peasants are particularly poor), spend money on tournaments, check your progress, continue to the next stage of the game, and quit. These icons have been greatly improved on the final version. They are now colourful and detailed.

The idea is that from the first year (1156) the estate has to be managed in yearly turns, by maintaining the right balance of taxes and forces and proving yourself in the annual tournaments. The main strategy elements are apparent in the first part of the game where the allocation of available resources is planned. The option to continue is then selected.

The first part of this section shows a repetitive sequence of animals wandering through the forest. The more creatures, the less efficient the use of labour and land. A 'go away' icon allows the scene to change to the tournament sequence. This is the only part of the game that requires physical dexterity. The player takes part in a joust, and the top half of the screen displays the riders approaching each other. The bottom half has the jousting score on the left, and a view of the oncoming knight on the right. The cursor now becomes the point of a lance, itself made to move jerkily to simulate the effects of the galloping horse. By the time the two riders meet in the centre of the screen, the point of the lance must have been guided into a position that will result in a strike against the opponent. Enough successful passes and the tournament will be won. This section is particularly difficult to master, however, so practice will be necessary.

Whatever the outcome of the tournament, the next stage of the game deals with any battles and/or revolts by the peasantry that have to be resolved. Another option, to pay the militia for their participation to these events, is provided. A simplified graphic sequence showing a couple of figures in combat is used to convey the result. The colour of the figures also reflects how large the battle is. Assuming you are not totally defeated at this point, the next screen shows the harvest result. The greater the harvest, the more efficient the labour force and use of land. Random elements like the effects of weather are accounted for by animated clouds covering the sun. If all is well at this point, the game progresses to the next year and the cycle begins again.

Last month I said it was too early to tell whether the final implementation on the Commodore would be any good, as I had only seen a finished Spectrum version. The Commodore version has improved graphics, which add greatly to the aesthetic appeal of the game.

In fact, the game is quite enjoyable. What it doesn't provide is an accurate simulation of running a medieval barony. On the other hand, it does provide an interesting vehicle for strategy with a small arcade element in the jousting sequence. The portrayal of uprisings and wars are probably the biggest let down. The simple graphics display of a couple of sprites trying to chase each other off the edge of the screen is really unnecessary and unimpressive. But there is enough game material there to provide the player with a refreshing change from the usual offerings.

Presentation 77%
The icons work quickly and make interaction quite fast.

Instructions 61%
Not as good as they could have been. Examples of play are useful for this kind of game. There weren't any.

Authenticity 51%
There are some rough guidelines. Jousting is tricky and painful...

Playability 66%
Very easy to get into.

Value For Money 79%
A good price for a well designed game.

Overall 80%
An intriguing and enjoyable game.

An intriguing and enjoyable game.