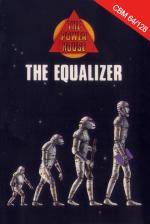 The new Power House label is old Alpha Omega in disguise. But although Alpha games have rarely stunned the world they are visually fairly cheerful.

The Equalizer, the latest, has nothing to do with the TV series but deals with the evolution of man. It is about the survival of the fittest as you battle across screen after screen in this jump and shoot action game.

Starting off in a prehistoric jungle, you battle your way through the ages and, finally, into the future to rescue your girlfriend. On the way, herds of strange creatures try to stunt your growth with their lethal touch (!) as you leap from platform to platform.

The graphics are blocky and reminiscent of the Japanese's MSX characters, and the action is linear. Also, the platforms are all in a line unlike the now standard ladders and ramp style. Still, The Equalizer is a mean game, but it is hardly likely to stun the world.

A mean game, but hardly likely to stun the world.