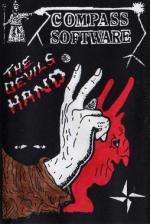 This is the sequel to both Demon From The Darkside (84%, Issue 35) and The Golden Mask (74%, Issue 41), and is the third and final part of "The Demon Trilogy". Like its predecessors it was written using the now ancient Quill with The Illustrator and Press data compressor (all produced by Gilsoft). Thus its presentation is very similar to those two previous adventures, with plenty of colourful, well-drawn pictures to add to the atmosphere.

The ominous plot sounds familiar - an evil demon called Drakon has escaped from the hero, Morrack, and disappeared into the mystical lands of Gorgon. There, he has amassed hordes of ores, ready to lay siege to the tower of the powerful Wizard Zorron. If he succeeds he will wield enough magical power to control the universe. Your task, as Morrack, is to track down this vile villain and destroy him.

Your quest begins near a sea wall, around which a large troll lurks. The lumbering oaf is after your blood, after having smelt your scent (Chanel No 5 perhaps?). This immediate problem is fairly difficult to overcome and can only really be solved by trial and error, as there is no logical solution. Plus the fact that you only have a handful of turns to play with, before the terrible troll rips your throat out (urgh!).

Once this irritation is conquered, the first of several characters is encountered - Gruff The Dwarf, a helpful little soul, is only too ready to bravely aid you in your hazardous venture. And hazardous it certainly is, with plenty of enemies and other perils ready to drain your life away at the slightest mistake. Thankfully, a STORE (in RAM) facility allows you to experiment without perennially having to worry about getting killed.

Swimming to a distant island you meet the first of many orcs [They're everywhere nowadays - Ed]. This one is rather more difficult to vanquish than most, as he cannot be defeated by FIGHT or KILL ORC. Instead a more obscure method must be used - a clue to this is given by the location description.

Numerous objects can be collected, each being accompanied by a small picture - a nice touch. However, only seven items may be carried simultaneously, causing much dilemma as to what to leave behind - some of the objects are just useless red herrings. The uses for some articles are also very obscure, such as that of the charcoal.

Vocabulary is understandably limited mostly to standard Quill commands, although typing VOCAB reveals some extra ones, including FOLLOW and STAY which are used to control the actions of your colleagues. Another interesting command is COMPASS (the name of the game producer, of course) which replaces the normal compass letters with arrows.

The appearance is smartened by a stylish and legible, redefined character set. All location descriptions are accompanied by a small picture of the Devil's hand itself - a human hand making a shadowy image of the devil (this replaces the mask symbol used in the same way in The Golden Mask).

With The Quill being such an old utility and having been surpassed by the Professional Adventure Writer (PAW) (also from Gilsoft) it is now rarely used, even for home-grown adventures. So seeing it successfully used here is a reminder that only the imagination and skill of the author can create an absorbing adventure. Author Jonathan Lemmon says he stayed with The Quill to maintain the style of the two previous games. Adventure-writing utilities are only tools with which to work and do not ensure good adventures, no matter how many features they offer. Nevertheless, the newer utilities allow a greater degree of freedom to express new concepts, such as character interaction, and Jonathan Lemmon says that this is his last "Quilled" adventure - he's moving onto the PAW.

Yet more evidence of the sensible attitudes of Mr Lemmon is shown by his use of pictures, which can often serve only to detract from the atmosphere created by the text. This is certainly not the case with The Devil's Hand and the well-drawn, colourful pictures enhance the enjoyment of this competent little adventure.

If you feel like battling against evil, The Devil's Hand can be obtained by sending £2.50 to Compass Software, 111 Mill Road, COBBOLM, Great Yarmouth NR31 OBB.

The well-drawn, colourful pictures enhance the enjoyment of this competent little adventure.