﻿ The Crash Collection Vol 1 (US Gold) Review | Your Sinclair - Everygamegoing 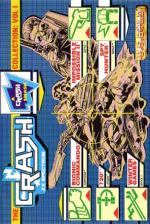 The only real surprise in this compilation is the name - I always thought a crash was fairly undesirable among the computing fraternity. Still, all the titles contained on it seem to load okay and each was highly rated by YS in its day, so you shouldn't have anything to worrry about.

This is probably the best of the bunch. Bionic Commando notched up an easy Megagame when it appeared 18 months or so ago, and hasn't really aged at all. Aided by your telescopic bionic arm, the idea is to swing from platform to platform nuking baddies, presumably with some ultimate goal in mind. The five scrolling levels are colourful and varied and you'll never find yourself taking the same route twice. A very nice conversion indeed. Tragically, they've only included the 48K game - the music in the larger version is fab. Rating: 91%

Another conversion and another former Megagame which perhaps looks a touch better than it plays, but is thoroughly triff all the same. The plan this time is to skateboard around Skate City trying to clock up enough points to enter each of the tour parks where assorted stunts must be performed. Although spookily monochromatic, the graphics are superlative (gurt lush as we say in Bristol), right down to the little animated break dancers and body builders. And if you get bored with sticking to the straight and narrow there are plenty of opportunities for inventive mucking about. Essential, really. Rating: 88%

Just when we were doing so well the compilation takes a chronological leap backwards, with a bit of seasonal misapplication thrown in for luck. Winter Games was originally one of the better sports sims, but it's looking distinctly wrinkly now. Much of its success, I reckon, can be put down to the attractive backdrops. Take these away and the game seems very shallow. Just for the record, the seven events are Figure Skating, Free Skating. Speed Skating, Hot Dog, Ski Jump, Biathlon and Bobsled. Quite a compilation in itself. Better with lots of players (up to four), but you'll probably end up getting out the Scrabble instead. Rating: 59%

Rather more thought is required for this one, so it makes a pleasant change from the rest of the pack. Unfortunately that means that I 'm completely crap at it. It takes the original Impossible Mission theme and bolts on lots of extra goodies. As well as the straightforward platforms, lifts and robots there are moving platforms, mines and, ooh, millions of other things to fiddle about with. The graphics are excellent and the challenge is \ enormous. Yet another Megagame. IM2 makes the compilation seriously worth considering, even if only a couple of the other offerings tickle your fancy. Rating: 90%

Carbon dating reveals this one to originate from the early cretaceous period. Spy Hunter seems amazingly crude today, which is a shame as I can remember playing it for hours as I sat on my potty. It's the original scrolling road game which at the time was pretty innovative, what with those add-on weapons and the mutation into a boat. Spy Hunter still retains a fair amount of its playability and shouldn't be written off entirely, but it seems like a bit of a space-filler to me. Rating: 56%

Not, perhaps, the ultimate compilation but The Crash Collection contains three superb titles and a couple of bearable ones. Be aware, though that two or three of them are either out on budget or have been featured on other compilations so the chances are you could pick them up cheaply without having to fork out for a load of others you don't really want. Otherwise, at (erm... prod, prod, prod) £2.59 each, they cost less than yer average budget game and, on average, are a lot better.

A mixed bag, as Ian might say, but five above-average games for 13 quid can't be bad.

A mixed bag but five above-average games for 13 quid can't be bad.
Logout