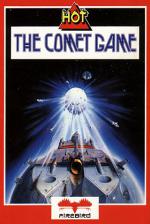 Aggggh! Gosh, somebody better help us - a horrible steaming comet is hurtling towards our beautiful bluey-green planet at a large rate of knots, and clinging to its knobbly exterior are a whole bunch of revolting germs. No, not Gerry the popular beatnik folk hero, these ones are far more evil and if the comet crashes into our planet, they'll infect everyone and certain people will be jolly peeved that they closed down half the National Health system because everyone's going to need a doctor if this comet can't he stopped.

So, a hero has to be found to fly a spaceship and intercept the comet before it reaches Earth. That hero, dear reader, is you. Needless to say you have to face all sorts of heart-stopping dangers, five different ones to be precise, before you reach your goal.

There are five of these sub-games and they all have to be survived to ensure that you reach the comet. The first is a situation where the antenna dish on the top of the spacecraft gets out of alignment and has to be realigned. Moving the joystick left and right turns the antenna and a signal sounds. When it's at its highest pitch the dish is correctly aligned. The big problem is that a timer swiftly counts down as you're performing the manoeuvre and if it reaches zero before the dish is aligned the game terminates, the mercy mission is a failure, and just to rub it in the screen fills with bananas to show you've slipped up. Ha!

The second is el massivo problemo - the coffee machine has gone horribly wrong and you're just about to die from lackofcoffeeitis! Well, if the pilot gets to the planet, the more caffeine in his system, the better his reactions... Nine icons are displayed on-screen and using a cursor and the joystick fire button you must switch the correct one off and on so that the right amount of ingredients are put into the coffee machine. Another emergency arises when the life support system breaks down, and naturally if the situation isn't quickly rectified you'll die of suffocation and get the banana treatment. Getting the life support system fixed involves shooting balls with a cursor. It sounds strange, but apparently these balls are messing up the air duct by bouncing around at high speed. Once again, there's a time limit to complete this sub-game, or it's banana time.

Next the computer breaks down. The problem is that four of its external LED's have turned renegade and are not conforming to normal standards, ie: some are switched on when they shouldn't be and vice-versa. The four little lights are shown on the right hand side of the screen and many wires trail from them. To make things all correct and ticketty boo again, you have to switch them on or off to restore the correct pattern on the display. This is done by moving a cursor up and down the wires and lighting/dousing the LEDs by switching the current on or off with the fire button.

The final emergency is just like Missile Command - the onboard computer suddenly discovers that there are a whole pack of missiles homing in towards the spaceship. Luckily, though, you've got a cursor and an unlimited supply of ABMs to fend off the incoming threat. When you've destroyed enough missiles, the ship is declared safe and the mission can continue.

Once you've survived twenty emergencies (they happen randomly) you reach the comet and finally get a crack at averting the biggest threat to the human race since F111's flew over Libya. Flying low over the comet you must destroy the gruesome looking Germ Bags which sit on the surface. Decontaminate the comet and it's back to earth as a hero...

'A daring action packed space adventure with all the risks' says the advert. 'Thrills and death defying challenges' it continues. The only death defying challenge is whether you'll die of terminal boredom or not. The game is really awful, with five boring tasks to complete time and time again to ensure you reach the comet (which has now gone of course). The games are all dull and include a feeble Missile Command attempt, a listening test and a game which involves pressing the fire button twice. The other two aren't as bad but are still really crummy. The graphics aren't much cop and the sound is very dull indeed. Don't do what Giotto did - steer well clear of The Comet.

Actually, I don't think The Comet is that bad, but that's not to say I think it's good. I've certainly seen and played worse - usually at a lower price - but this is quite fun to play for a short while. Everything about The Comet is average or below average - the graphics are reasonable in their definition (the colour scheme is a bit bland, though) and the sound is nothing special (the FX are rather weak). The game itself is simple and enjoyable initially, but my interest waned after about half an hour, as it proves boring and repetitive to play due to a lack of variety and interesting things to do. Maybe if The Comet was considerably cheaper then I would consider it a possible purchase, but at the price I wouldn't bother with it.

Presentation 80%
No game options, but the game has a well thought out screen layout.

Graphics 56%
The parallax of the stars flying past is nice, but everything else is pretty dull.

Sound 20%
It's at times like this when you really appreciate the volume switch.

Hookability 52%
All the sub-games are very simple and getting into the game itself is a doddle.

Lastability 38%
The simplicity and repetitive nature of the games soon makes it pall.

Value For Money 33%
Overpriced for such a damp squib.

The simplicity and repetitive nature of the games soon makes it pall.