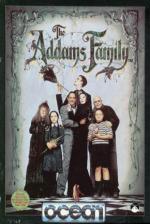 So this is it - the one we've all been waiting far. The mighty Ocean's high profile release, 1992's big film licence and possibly the Mancunian giant's 8-bit swan-song. So why, after all the hype, is The Addams Family such a ridiculously difficult and hopelessly dated platform game that looks more like a mediocre budget title than the mega Sizzler we all expected? I'm depressed!

The first thing you notice about The Addams Family is the game makes no attempt to follow the plot - the movie had nothing to do with Gomez (that's daddy Addams, the one that looks like an extra from a Zorro movie) searching the family mansion for his kith and kin. Why they want to spend all that cash on a film licence and not use it is beyond me, but I'm glad they used the music from the TV version instead of that blimmin' awful MC Hammer ditty (rap with a capital 'C').

I suppose you could excuse the ropey plot if the gameplay delivered the goods. but it doesn't. Leap around platforms, dodge the baddies (or jump on their heads!), gather the keys... this sort of thing was done to death in Jet Set Willy, and that's archaic! Make no mistake, this isn't a cut down version of its 16-bit counterparts, it's a completely different game, and a very dated one at that. Gone is the push-scrolling (the C64 game is flick-screen), goodbye Mario-esque power-ups, au revoir anything interesting at all, really... and hello samey, derivative dribble with far too little depth.

Ah yes - the depth! If the Aegean Sea was as shallow as The Addams Family, Robert Maxwell would still be alive! The puzzle element is hopelessly underexploited: there's no equipment to gather, no portable bridges and ladders, no Blues Brothers style balloons to lift you to higher platforms, no nothing really - just baddies to bash and keys to collect!

Ocean made a real big deal about the game's hugeness, but what's the gain in that if every screen plays just like the last? The only break from the boredom are the sub-levels after you've found each family member, but they certainly don't save it.

Although the game boasts an incredible 240 rooms, you'll not get to see very many of them - not only is the game shamelessly derivative, it's also damn near impossible! Almost every leap in the game is designed to be barely possible, so you end up attempting the same jump 20 or 30 times! Some platforms are impossible to reach without using a monster's head as a springboard, but this potentially excellent touch is ruined by the unforgiving nature of the gameplay.

And when all your lives are spent (which will be soon), guess what? Multi-load! Every time you die, you have to reload almost from the beginning! Aarrgggghhhh!!!!!!!!!

The Addams Family isn't without its good points. The artist's done an amazing job producing colourful, atmospheric backdrops and some of the dinkiest sprites imaginable. Controls are responsive (if a little bizarre) and the animation is polished to perfection. If the game designers had done their job as well as the programmers, Ocean would have a real winner on their hands. Instead they produced a killer 16-bit game, with the 8-bit versions tagged on as an afterthought. Oh, how the mighty haven fallen!

Okay, so they are supposed to be crazy and kooky and all that stuff. And if only I could find one of the blighters I'd be able to see for myself just how spooky they are. As it stands, the only thing I know for sure about the rest of Gomez's happy family is that they're piggin' difficult to locate! Umpteen trillion nasties and more precarious platforms than Victoria station during rush-hour stand between you and your goal - so you'll need the patience of Job's mum if you plan to keep your hair on your head and knickers twistless...

Colourful, well-animated sprites compete with the gorgeously detailed backdrops in an effort to grab your attention. And grab it they do, for a while at least. What looks like a stonking great platform-collect-'em-up soon deteriorates into a frustrating all-too-easy-to-die disaster as jump after jump fails to get you to where you want to be.

Cartographing couch-potatoes should get a kick out of putting the map together but most other platform pundits will find that, like Gomez attempting to reach the next platform, the game falls too far short.

It's usually wiser to avoid enemies rather than blatting 'em with yer brogues. Some screens, however, can only be negotiated by using a toe as a springboard - if a platform appears to be out of reach, for example...

Avoid spiky blobs and red floors at all costs, and be careful on the cauldrons; some of them simply drop away when landed on.

Keep your paws near the pause button ('p' on the keyboard). Often, the only way in which you will be able to work out how to safely traverse a screen is by careful scrutiny of all available objects and platforms. The nasties rarely give you an opportunity to hang about and gawp - and even when you're stood in a 'safe' place your energy level diminishes unless in 'pause' mode.

Finally, booting the cat halfway around the living room and back again will not help you progress any further in the game, whereas cursing the programmers every time you fall off a platform does offer some degree of satisfaction! G'luck, chums.

Graphics 90%
Wonderful - if only the game were as good!

Hookability 35%
Too difficult to get into straight away.

Lastability 82%
But the long-term challenge is considerable.

More precarious platforms than Victoria station during rush-hour... Like Gomez attempting to reach the next platform, the game falls too far short.