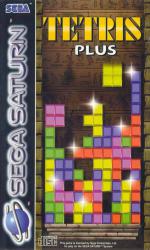 Tetris is undoubtedly the most addictive puzzler in the history of games. Inevitably, someone's created a Saturn version. Join us in a look at the connoisseurs' choice of video games.

When you think of Tetris two words spring to mind, Game Boy and addictiveness. I'm sure that every single one of you out there has played Tetris at some time or other - hell, even my mum has had a go! Tetris has universal appeal, no need for instructions: you instinctively create lines from shapes, each of which is formed of four blocks, and watch them disappear.

Tetris Plus is a godsend for fans as the original game is joined by a Vs. Mode, Puzzle Mode and Edit option. Jaleco has added its own Story Mode - two intrepid treasure hunters set out to find loot amongst the blocks.

Puzzle Mode is easily the toughest mode. You navigate the Professor to the goal line at the bottom of the screen against the clock. Blocks in his path are removed by combining them with falling pieces. Above the professor descends a rotating blade, forcing the player to form life-saving strategies quickly.

Here, two players tackle each other over three sweat-soaked rounds. The gameplay is similar to the solo mode, but every time a line is deleted by one side, two lines are passed to the opposition. Nastier effects are caused by deleting combinations of lines. (A technique Phil claims Matt has yet to grasp!)

This neat little option allows players to lay out their own puzzle courses. The edit screen allows you to choose which background you like, how many blocks you want to put down to block the goal-line and decide where the professor starts. You can save up to ten edits for future play.

Well, it's Tetris alright. But somehow it looks a little lost on a big screen after years of playing it on a Gameboy. For some reason, it's actually a bit jerky which is inexcusable considering it's running on a 32-bit machine like the Saturn.

Still, the Original Mode is still supremely playable and the Puzzle Mode adds a new twist, but it's not entirely essential. Especially since the little Professor guy has an annoying tendency to get crushed by the ceiling all the time.

The two player game is frantic, and it's very satisfying to dump a load of extra lines on your opponent. When all is said and done, it's still Tetris and it's still great, but Bust-A-Move 2 is by far a better puzzle game.

I love Tetris and Jaleco's offering has inspired me to play it even more. The Puzzle Mode is nothing special, but Vs Mode is great competitive fun.

There's nothing really new in 'Plus' that didn't appear in the original game - standard Tetris is the game you'll probably play most, but I can't see people sitting at home playing Tetris for hours and hours like they used to.

If you're into puzzle games then get this, especially if you have someone else to play with. If you think that you're going to be playing alone then I would personally opt for the more addictive Bust-A-Move 2 from Acclaim.

The most famous puzzle game ever reaches the Saturn, but it hasn't kept up with the times. Not as good as Bust-A-Move 2.

The most famous puzzle game ever reaches the Saturn, but it hasn't kept up with the times. Not as good as Bust-A-Move 2.