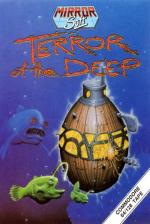 Terror Of The Deep

When I first sat down to play this, admittedly in a semi-drunken state, my initial impressions were "My God! Someone's trying to do a rip off of The Eidolon, and failing miserably!"

Anyway, after several pints of caffeine had been intravenously fed into my system, I finally came to my senses, and realised it was nothing like The Ediolon; in fact, it was more like an underwater flight simulation!

The game is set at the close of the 19th Century after a shower of meteorites were seen falling from the skies over Loch Ness.

Strange creatures are later reported in the Loch. An eccentric engineer living by the shore has developed a diving bell and has selected you to explore the loch and rid the waters of its alien population.

You start your mission, by marking on a map of the Loch, where you want to be lowered into the dank waters. When you are underwater, the view is from inside the diving bell. Control of this is via your hands which are represented on the screen in graphic form. You control the various items of equipment, including a trigger button, a light, thrust, rudders, energy wheel and detonator to mention just a few by moving the joystick left and right, to move the hands onto the various controls, and then move the stick up or down to operate them. You must keep going up for air, as well as supplies and new weapons.

To find out where the aliens are, you must follow the various fish to the source of the energy, plant some bombs, move away and detonate them. At the end of the game, a newspaper reports how well you did, and in may case, it usually says, "Stationary Craft Attracts Destruction", even though I was moving at the time!

As I said, this reminded me of The Eidolon from Activision at first, but on not too close inspection, I realised this didn't have the same attraction as the other game. The graphics in this are quite good inside the craft, and on the Loch map, but the sprites are fairly chunky and the movement is quite jerky. The sound is abysmal. If you don't reach for the off switch on the TV after 45 seconds, you must be as musical as Les Dawson!

This is a nice idea that hasn't quite come off, which is a great pity because it could have been excellent.

Terror Of The Deep

This is a nice idea that hasn't quite come off, which is a great pity because it could have been excellent.