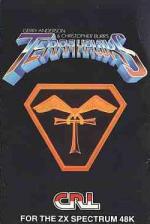 Quite a lot of software houses recently have been vying with each other to secure the rights to well known TV series to produce computer game versions. This is C.R.L's bid for top viewing figures, an adaption of Gerry Anderson and Chris Burr's series Terrahawks. In some respects, although not visually, Terrahawks resembles their earlier Omega Run - a 3D mission to fly a craft to a certain designated spot using a range finer and compass bearing. Its author, Richard Taylor, has previously produced the utility programs Hi-Res for the ZX81 and Fifth for the Spectrum. Chris Burr of Anderson Burr Pictures has said that Terrahawks is uncannily similar to the opening sequence of the TV program and that the game represents a masterpiece of programming creativity.

In fact its 3D vector graphics do work well, but are nowhere near as fast as some existing games and not a patch for speed on Design Design's Dark Star.

Your mission is to fly across a landscape dotted with large tower blocks called Crystal Towers and find the entrance to the Time Vortex which will lead you onto the next 'stratum' of the game. You start off flying at 199 feet. To gain entrance to the vortex, your height must be not more than 40 feet, preferably about 30 feet. There is an intro sequence to each game which shows the effect of your craft being pulled into a black hole. The game takes place within the confines of the black hole, and the object is to succeed in getting through the various strata to escape at the other end.

The screen is divided into two, the top half being a view through the front shield of your craft. Here you can see a dotted line representing the horizon, and the wire frame 3D tower blocks which appear and move towards you. Controlling the direction and height of your craft alters the perspective view you see of the towers. It is possible to fly upside down if you really feel like it. The higher you fly the more fuel you use up but the lower levels mean dodging more towers or having to shoot more of them down with your limited supply of 'antimat' bolts: Towers hit by these are knocked down in height by increments.

Below the viewscreen is the instrument panel. This includes a status board with lives, shields (you start with 5, after that a collision with a tower will mean crashing), level you have reached and an altimeter. Next to the status board is a compass, which is used for fine adjustments to direction during the approach to the vortex entrance. The right hand board contains an attitude gauge, fuel gauge, range finder and a close range scanner. The range finder uses a bar which decreases with distance to vortex, and above it is a light which is red when off course and green when on course for the vortex. When the vortex is a short distance away, it appears as a dot on the scanner, and by using that and the compass you should be able to line up and fly into it.

Entering the vortex, which is a long line of rectangles, the game freezes, informs you of your status and then lets you continue. When approaching and leaving the vortex, you must be careful not to impact with its sides or top. The next stratum up contains more towers, and more high ones. The other difficulty is that your fuel and antimat bullets are not replenished so you must complete your task with those in hand.

Control keys: 1/0 up/down, 9/0left/right, ENTER to fire or cursors
Joystick: AGF, Protek, ZX 2, Kempston
Keyboard play: both options are rather awkward and key response is quite slow
Use of colour: good, wire frames are in green on black
Graphics: effective 3D which tends to break down the closer objects get
Sound: good
Skill levels: 1
Lives: 3

'A fairly fast moving wire frame graphics game which is very playable. Unfortunately the instrument panel at the bottom of the screen is pretty incomprehensible and I had a lot of trouble making my craft fly the way I wanted. The 3D effect is as good as most wire frame graphics are, but they tend to lose their 3D when you get near to the ground. The vortex is very hard to find and when you do, it's almost impossible to enter as it is so near to the ground.'

'This is not a terribly fast game - but it's not all that slow either. What makes it difficult are all the towers constantly looming up. The colour has been used quite well and the sound too. Line graphics don't tend to work very well when close up and at times you are confronted with a forest of vertical lines without a clue as to what is what, but these are quite good in the distance. I wouldn't call the 3D effect superb, but effective enough to create a sense of depth. I like the 'black hole ' effect at the start of the game. This is one of the best games from C.R.L. which holds enough challenge to be playable.'

'Terrahawks is difficult, which will probably mean it appealing to lots of people, although it isn't particularly fast and the trip to the vortex takes some minutes. It seems a pity that the so called 'mathematical calculations' referred to in a press release i saw have failed to take account of the fact that objects moving towards you appear to travel faster the nearer they get, these actual slow right down. Still, the 3 works well until you are low, after which it is more a matter of luck than judgement. Successfully entering the vortex is quite thrilling, however, especially after the battle to find the damned thing! After playing Terrahawks for three or four hours, I came to the conclusion that it had grown on me, and the reasons for playing another game were largely based on the judgement needed to conserve fuel and bullets at the right moments to make successive levels possible.'

Terrahawks is difficult, which will probably mean it's appealing to lots of people, although it isn't particularly fast and the trip to the vortex takes some minutes.