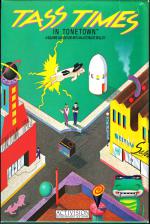 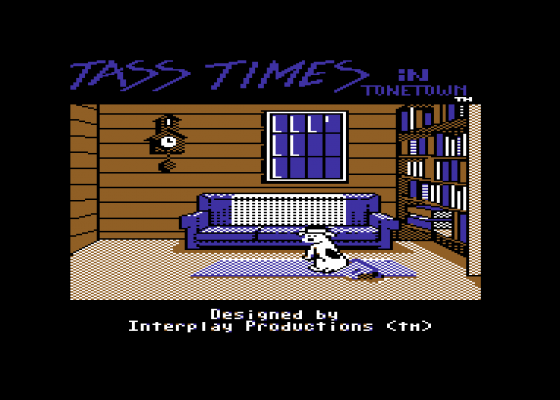 Every once in a while, there is an adventure so inspired, so beautifully crafted and so ingeniously devised that it leaves its mark on everything that follows.

I predict that the obscurely titled Tass Times In Tone Town is just such an adventure. Y'know, grey habits and long beards might not be totally trendy in this strange age, but this adventure game for the terminally hip-flipped makes you feel like you could do anything.

You think I'm joking don't you? Ol' Whitey's lost his box at last? Very well. You asked for it. 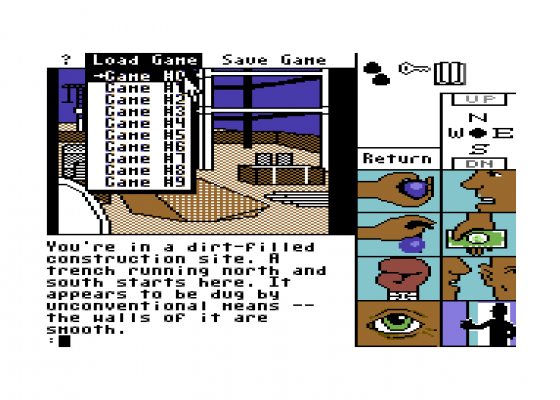 Gramps is missing. Seeing as this has made first page in the Tone Town Times (which only has the news that's tass to print), this must certainly qualify as a valid plot for the adventure. You know roughly where he's gone - another dimension. He wasn't totally tass, according to reputation, but he was well liked. There is a rumour that Franklin Snarl has something to do with this. If you knew him like I did, you'd believe it too. Whatever, as the man says, you've gotta getta take on Gramps (please be patient; this is difficult for me too).

Tone Town doesn't like tourists, so you're going to need a guide to survive. Luckily, Ennio's available. Ennio's a dog. He's also a pretty tass journalist, being a six-time recipient of the Moonal Ultra Journalism award, and an ideal ally. He's not the only friend you'll need, though. Try seeing Chaz. He runs a 'Tique that can do wonders for your tassitude, with the aid of jumpsuits, hooplets and dye cuts. I have it on good authority that globurgers are fairly amazing as well. I wonder whether they're made out of Blobpets? After all, these burrowing beanbags have been getting a lot of bad publicity recently and at least this is a way to deal with them...

Okay, down to Earth. This game absolutely hums with atmosphere. It's weird, cleverly allegorical, funny and compulsive. Some of the people responsible for Mindshadow and Borrowed Time are responsible for the game, and from the point of presentation, it owes a lot to the later title. This game is also icon-driven (though there's a facility for text), uses graphics and employs elements of animation.

The whole affair is highly polished and has an outrageously surreal scenario that just grabs your weirdness glands and squeezes them dry. You can't help but get caught up in it. The dialogue is a wonderful spoof on Newspeak from 1984, the graphics are exciting but don't get in the way, and the plot is totally and utterly banal. It's brilliant.

It's also hard. The thing is, if you don't start getting into the game, picking up the clues and giggling at the subtle jokes, the whole thing might as well be written in Cuneiform (which would be no problem for one such as I, but would ruin things for you).

As far as physical quality goes, Tass Times In Tone Town is as good as you could want. There are some irritating limitations in your choice of options, but this is more than made up for by the presentation and playability. If there was ever a case of a work of art being admired for its subtle imperfections, then this is it.

This is what adventures should be about - experiencing other worlds. There is nothing in this game that can be taken at face value. There is nothing here that you will have come across elsewhere. It's 100% addictive. The real plot is so up the creek that I'm not going to try and explain it. I would only take away all the magic by doing so. The best thing would be to simply buy it. No, I haven't gone senile. I've simply fallen in love with a brilliantly original game.

100% addictive. I've fallen in love with this brilliantly original game... The plot is so up the creek that I'm not going to try and explain it. 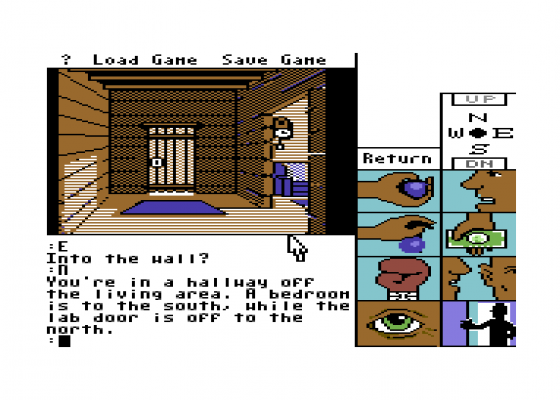 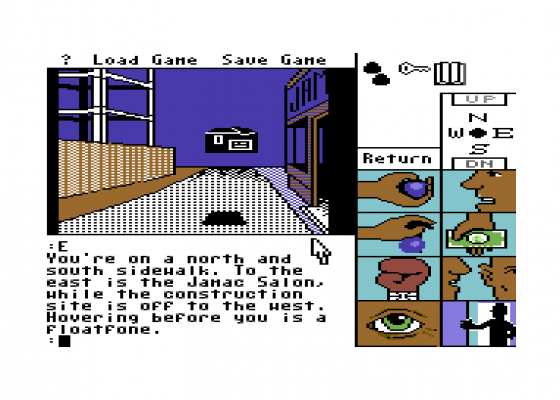 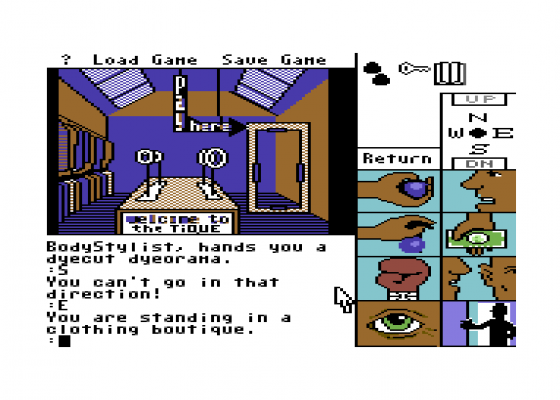 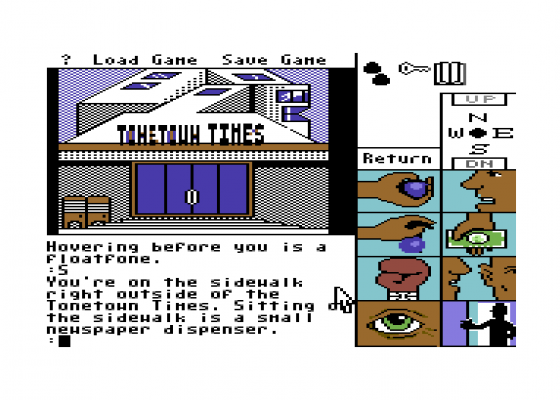 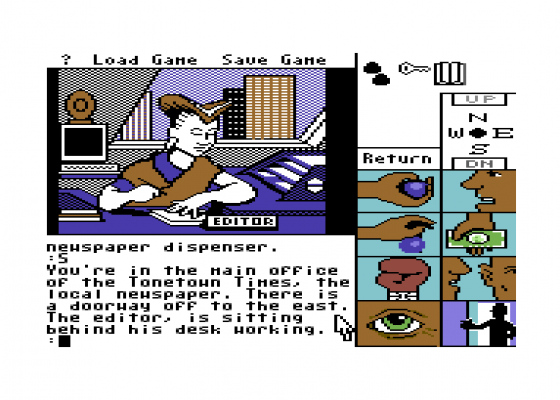 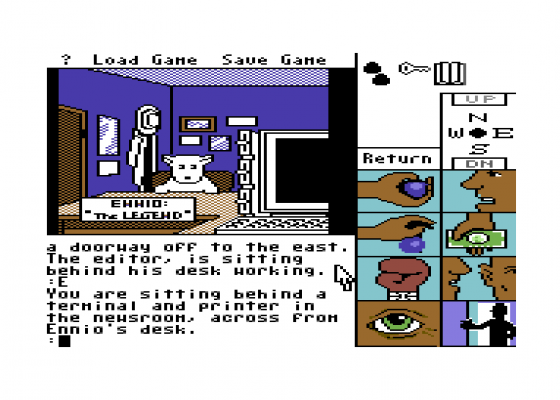 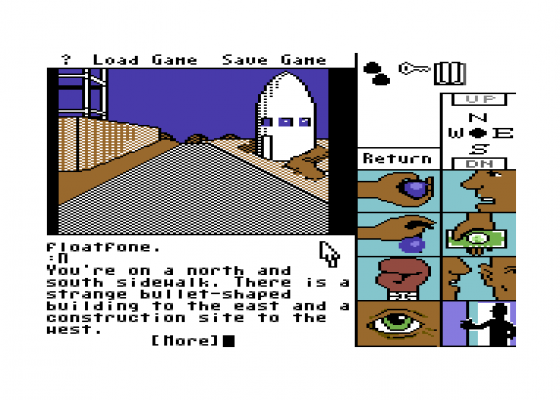 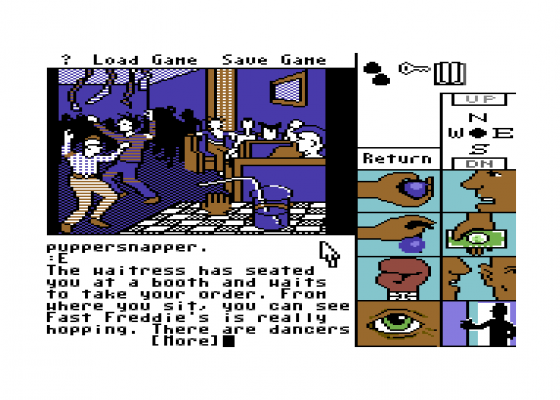