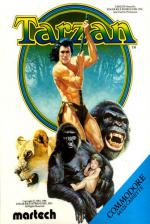 According to African legend a human baby was abandoned in the forest and found by a kindly she-ape named Kala. Brought up as one of Kala's own, he grew to learn the ways of the jungle and the language of the beasts. Years later he was found and named as John Clayton - Lord of Greystoke, and was bought back to England to claim his rightful inheritance. However, he occasionally returns to the wilds to become Tarzan: Lord Of The Jungle.

Now is one of those occasions - Tarzan has returned to the jungle for a holiday with his good wife, Lady Jane Greystoke. This would normally be a relaxing time for the two, but their enjoyment has been ruined by Usanga, evil chief of the Wamabo who has kidnapped Jane. Usanga has done this to force Tarzan into finding the seven gemstones which have been stolen from his tribal shrine.

The gemstones are believed to be the Eyes of the Rainbow, one for each colour of the spectrum. If Tarzan doesn't go out and find them, Jane is going to be fed to the tribal pet, Sheeta the Panther. Usanga has given Tarzan three days in which to complete this task...

After consulting his information sources, Tarzan discovers that the Eyes of the Rainbow have been scattered around the dense jungle by a family of pesky chimps. The ape-man's quest involves travelling through a dark, spider-filled maze of caves, crevasses, swamps and treacherous quicksand. The screen flicks from location to location as Tarzan explores.

Objects have to be found if Tarzan is to achieve his aim - a rope is used to traverse crevasses and the torch allows him to explore the dark caves. Throughout the quest hazards such as headhunters, lions, snakes, spiders, quicksands and pits are encountered. If Tarzan falls foul of one of these, he becomes stunned for an hour and the on-screen timer shrinks accordingly. Luckily, Tarzan isn't powerless when it comes to defending himself - he can punch out at marauding creatures, giving him precious seconds to beat a hasty retreat.

If Tarzan manages to collect all seven jewels within the time limit and deliver them to Usanga Jane will be released. If not, his wife becomes nothing more than another bowl of jungle soup...

Initially, it all appears to be there - good graphics, superb music and a good adventure, but for some reason this suffers from poor playability.

The opposition gives a great deal of hassle and it's really quite difficult to successfully engage in a fight with them.

The lack of on-screen information is a bit worrying - occasionally I was unsure what was going on. Personally, I'm quite happy to sit down and play it, but I have my doubts about whether it's worth the asking price.

This is another in a long line of fair to middling arcade adventures: the graphics are good enough, the sound works well and there's a large map to explore.

The only trouble is that we've seen this type of program so many times before - there are no original features to inspire or enthrall. If you're an arcade adventurer who's desperate for some action you could do a lot worse than this. Personally, I'd wait or something more exciting to be released.

I found Tarzan intriguing at first, but soon because bored when I found myself going round in circles.

It's very easy to get lost as all the scenery looks the same, so mapping is essential. Tarzan is poorly animated and runs at a very slow pace. I found it quicker to move around by somersaulting. The tune that plays during the game creates a suitable atmosphere, and I love the 'chirping cricket' noise made when night falls.

It's a shame that the gameplay doesn't match the music. As it stands, Tarzan is too slow and tedious - the licence has been wasted on what is little more than a run-of-the-mill arcade adventure.

Hookability 62%
Initial urge to explore, but nothing new to captivate.

Lastability 41%
Quite tedious, due to a distinct lack of originality.

Value For Money 45%
No redeeming features to justify the price tag.

Overall 50%
A mediocre arcade adventure that sadly doesn't capture the 'feel' or 'flavour' of the character on which it is based.

A mediocre arcade adventure that sadly doesn't capture the 'feel' or 'flavour' of the character on which it is based.