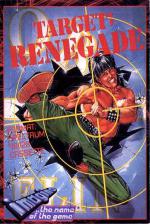 Ker-paff! It was a slick move to say the least. I snuk up behind the ugly goon with the motorcycle helmet and kicked at the back of his knees. The sledgehammer fell from his hand and skittered across the concrete floor of the car park. Howard was there in a flash, wielding the recovered hammer about her head. The goon's biggest mistake was getting off the floor. With a squadge resembling the sound of a water melon falling off the back of a truck, she turned out his lights for good.

Target: Renegade (the title's relevance escapes me) is the sequel to Ocean's smash hit of last year, Renegade (oh yes it is). I won't bother to tell you anything at all about the first game, because they're very similar indeed. The only major difference you need consider is that Target: Renegade has a two player co-operative option, whereby you can team up with a chum and bash the bad guys together.

Set in a maze of underground car parks, dingy alleys and definitely unfriendly bars, Target: Renegade as it show now be known, in an affectionate, fluffy marshmallowy sort of way [What sort of a mag do you think this is, you great nance? - GT] Anyway, Target: Renegade pits you and a mate against the most unsavoury bunch of characters, all working for the mysterious Mr Big, and hell-bent, for reasons best known to Mr B., Ocean and themselves, on turning you black and blue and into roughly the same shape as pile of sick.

Despite the extraordinary level of violence. Target: Renegade Is quite appealing to watch. The animation is first rate, and the number of characters on the other side is wide enough to provide the variety that I thought was missing in the first game. There are lunatics on motorcycles, punks, hookers, pimps, nasty sods with sledgehammers, nasty sods with wild dogs, try saying that when you're sick-shaped, all with definite scuffle-orientated intentions.

Should you be lucky enough to make your way to a life after the first few screens of brutality, you'll find yourself heading down from the street towards the car park area. As you and your partner fight on through the numerous screens, you'll have to get used to adapting your fighting style to suit the conditions in which you find yourself. While you can catch out the stupid bikers with a flying kick, the square-jawed Beastie Boy lookalikes are a smarter group altogether, and you'll have to engage in a more strategic - if that's the word - approach.

Some of the streets harbour 'ladies of the night', whose knees are best avoided. Their bosses, nasty looking characters in fedora hats and sharp suits, are deadly. Every so often they'll casually reach into their jacket, pull out a gun and shoot you down. Of all the scenes though, my favourite is in the pool hall.T-shirted hustler shuffle up and swing wildly at you, jumping back and forth, whilst other bad guys come around the back.

The best part is that the weapons carried by the enemy can be picked up and used once they've been knocked down. The sledgehammer is particularly handy in tight spot; you can fell the goons like trees and head for the exit, sharpish.

Target: Renegade is similar in many ways to the coin-op Double Dragon; two players fighting as a team, various opponents and backgrounds, and the ability to pick up and use weapons left on the floor. It's definitely the most addictive game of its type I've played on the Spectrum. A slight niggle is that when playing by yourself (barf, chortle, etc) there isn't a computer-generated buddy to help you out. As a result, life is an awful lot more difficult, as many screens are virtually impossible to survive without a degree of teamwork. This is, however, merely an obligatory gripe, and it shouldn't stop you from rushing out and buying Target: Renegade before you've had time to spit.

As the baddies come on to the screen, you've got to get yourself in the best position possible to defend yourself. Standing in the centre of the screen is usually a smart idea, because although the bad guys come at your from every angle, at least you can run in any direction. Many a time I found myself totally surrounded in a tight corner with bad guys six-deep all around me. While it's possible to get out of some of the tightest scrapes, assuming your buddy is thinking quick enough, discretion is occasionally the better part of valour - there's no point wading in and getting a beating when you could hover around, picking off people one-by-one.

Ocean have included a rather charming feature for the more individually minded players out there. Should your mate get a little too cocky with his pool cue, and start flouncing around in a none-too helpful manner, you can sneak up behind him and smash him in the back, grab his stick and bash him in the face. Realism at any price, I see.

Great to look at and better to play. Fast, exciting and terribly wince-making at points. Top-notch.

Great to look at and better to play. Fast, exciting and terribly wince-making at points. Top-notch.