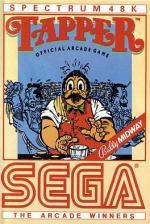 Regular readers of C&VG will need no introduction to the game Tapper which we reviewed exclusively in our June issue.

For those of you who don't get the UK's biggest and best computer games magazine each and every month, let me fill you in on the Tapper story so far.

Tapper is one of those fast and furious games that will have you on the edge of your seat.

You play the part of a hard-pressed barman in a Wild West saloon bar. Those cowboys are pretty darned thirsty and if your pint-pulling can't match the speed of their drinking, they are likely to pull you over the bar and send you flying.

If that doesn't sound difficult enough for you then you will be pleased to learn that you do not have just one bar to tend but four.

If you successfully sling four beers at your first four customers, forcing them out through the swing doors, then you can progress to screen two. This time you have two cowboys at each bar, then three and so on.

During their drinking session, some of the cowboys get peckish and tuck into a meal, making more work for you as you have to clear away the dirty dishes.

If you manage to clear away the food plates, two dancing girls appear on stage and do a can-can for your as a reward.

Points are earned every time you successfully repel a cowboy by slinging a glass of beer along the bar at him.

But be warned - if you should drop a glass, the game will send and you will have to start all over again.

The sort of panic-induced by Tapper when a cowboy is almost at the end of one of the bars and you are three bars away is a little bit similar to the nail-biting by Chinese Juggler from Ocean.

This similarity aside, Tapper really is quite unlike anything that has even been tried before.

I played the Commodore 64 version and found it fast, with excellent cartoon-style graphics and nice jingles.

Tapper really is quite unlike anything that has even been tried before... The Commodore 64 version is fast, with excellent cartoon-style graphics and nice jingles.