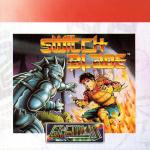 Havok, the evil warlord, has stolen the Fireblade and broken it into four pieces. This has caused the world of Thraxx, once a peaceful nirvana, to become a devastated wasteland. Now Hiro must enter Havok's Undercity and, as the last Bladeknight, assemble the pieces of the Fireblade and defeat Havvy (as he's known to his friends).

Hiro starts the game above ground, and must find an entrance to the Undercity. Once there, the numerous fiendish traps and puzzles must be solved in order to progress to the next screen. Hiro jumps, kicks and punches his way through the caverns, defeating the baddies either with violence or cunning - most creatures can be jumped over, or lured into falling down pits.

Goodies are scattered around the screens, and take different forms. Potion bottles can be kicked to reveal extra health, and shattering certain wall-blocks uncovers new (temporary) weapons, such as shuriken, bullets or fireballs, which are especially useful for defeating the major monsters that guard the parts of the Fireblade. Destroying these blocks also reveals secret chambers - so be sure to kick anything vaguely suspicious!

Power-up icons can be difficult to locate, but are a must-have when it comes to offing the bosses. Here's a look at the options:

2. Shuriken Move slowly through the air, but seriously injure foes.

3. Super Punch A close-range weapon that knocks the socks off the enemy.

The enemies come in many shapes and sizes in Switchblade. Dragonmen are fairly easy to dispose of - especially with a mega-kick - but have a nasty habit of pushing Hiro off the screen. As some creatures reappear every time the hero re-enters a screen, this can seriously damage Hiro's health!

Scorpions are fearsome opponents, and are virtually impossible to kill; the best bet is to leap over them. Of course, the cavern must be high enough for this!

It's about time a Rick Dangerous-type game was successfully converted to the GX4000, and this fits the bill perfectly. This style of game rewards intelligence as much as reflexes, with teasingly difficult puzzles that give the player a real sense of achievement when he or she finally works out how to get past them.

The animation is confident and expressive, and the music is absolutely wonderful. My only gripe is with the lack of colour; this obviously affects the visual side of the game, but the strength of the playability more than compensates for this. So don't be put off by the screenshots - this is an excellent game for GX4000 owners.

At last! A decent platform game on the GX4000! Switchblade might not look like the greatest game in the world due to the rather drab backgrounds, but it's the playability that counts, and this has it in abundance.

The landscape is huge, and there are loads of hidden screens and bonuses waiting to be discovered - just like a platform game should have! It's a pretty tough game, and you certainly have to battle every inch of the way!

It helps if you make a map (if you do, send it in to the tips section!), as there are a variety of different routes around the landscape, and some are more hazard-packed than others.

If you're a GX4000 owner who's looking for something decent to play, splash your cash on this smash!

Presentation 82%
A cartoon-style introduction sets the scene in an atmospheric fashion.

Graphics 84%
Brilliantly detailed with outstanding animation; it's only the lack of colour that lets the game down.

Sound 89%
Despite the lack of spot effects, the groovy tune is catchy and not the weedy sound usually heard.

Lastability 92%
With 150 screens and fearsome foes, Switchblade will keep even the most jaded players intrigued for a long time!

Immensely playable, with varied challenges and subtle changes in background. Addictive in the best possible way.