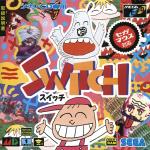 'Click': There's this dog in a laboratory, okay? Anyway, it drinks this test-tube full of stuff, right and...

'Click': After studying the Mona Lisa for a few moments, a young boy reaches over the security ropes and presses a button. Imagine his surprise when...

'Click': It's snowing. A boy decides to take his dog out and have some fun building a snowman. Little does he know that...

Infuriating, isn't it?! Yet the only way of finding out exactly what happens next is by taking a good look at Switch. Switch is Sega's latest oddball offering for the Mega-CD and it's mad! Loosely described as a game, Switch is presented as a package of over 1,000 sight-gags that fit together into some sort of adventure. The central character is a baseball-capped, dungaree-wrapped innocent young lad who is the victim of at least half of those sight-gags. The remaining 500 or so subject coy boy's dog to more of the same. The actual point to all this malarkey is to save 30 of the world's most famous monuments from being razed to the ground.

Choose the desired switch by moving the arrow over it. Hit any button and laugh at the results. Just see if you don't!

Save sixteen of the world's monuments from destruction by negotiating the safest route through a mapcap world. Push all the right buttons to achieve success.

Switch is inspired by many of the world's greatest sight-gags. It is a completely original concept for a video-game.

From what we can tell, the prevention of disasters is somewhat of a hit and miss affair. Whenever a disaster is triggered, the guilty switch is then marked out for the player's benefit, ensuring that the same mistake is never made again.

Of course, if you are the king of spawn, you may never witness the brilliant, digitised disaster sequences and journey through to the end of the game untarnished. Yeah, right!

Some switches prompt advice from our boy and his dog's mates. One of them is a scraggy demon, the other an angel. This contrasting pair appear to influence the player's decisions over which switch is pressed and where. Unfortunately, this isn't definite at all as the game's speech is in Japanese. Doh!

Even if we knew what they all are, listing all the gags in Switch is impossible because there's so many! The majority are hilarious - some similar to Monty Python sketches while others are closer to those freaky foreign jobs shown on BBC 2 every now and then.

They're of no use whatsoever, of course more of a hindrance than a help to our hero's progression - but the game looks better getting there as a result!

Another central feature of this unusual quest is a giant monolith, very similar to the one seen in 2001: A Space Odyssey. This acts as a gateway to several locations, often warping you to a far-off section of the overall map.

By pressing the start button, this map shows you your current location - its colour describes how much of the location is already explored. Up to three game positions can also be saved from this screen. In all, there are 21 stages with a varying number of levels.

I've never seen anything like Switch. The first day I played it, my jaw was periodically hitting the floor. Sometimes it was the incredible graphic and sonic effects, but mostly it was the total weirdness of many of the scenes.

This game's a mixture of the bizarre, the funny and the sick. And I did laugh - a lot. My particular faves are the statue of bums that pulls a gun and shoots the tourists, and the room with the dolphin and tiger which explode from the walls.

This isn't really a game at all, just memory and guesswork, but it has a strange and total compulsion. In its Japanese format, it's no use as an educational toy - though children will be fascinated (Some parents might be concerned by the fascination the programmers have with bums and breasts!).

I'd recommend it as the perfect interactive experience for older people who have a few friends round, as this has the makings of a cult classic which just might change the boundaries of the 'console market' and who uses them.

I'd say it's the best use of the Mega-CD yet. Sega Europe - be brave and release it.

Switch takes a bit of the classic Warner Bros cartoons and mixes it with a bit of Monty Python-type humour. The result is just about the funniest thing I've seen in a long while - books, cinema and TV included. Everybody in the office took time out to watch Switch in action.

As the first of its kind, Switch is an impressive achievement. Usually when we talk about animation it's under a different light than this - it's rife with fantastic sound effects created by the voice of Kent Prick.

Also, because this is a CD product, the soundtrack music is reproduced perfectly too. It all looks and sounds amazing! However, and it's a big however, there's very little actual gameplay. The pretence of some kind of world monument preservation quest is a bit thin and the button pressing amounts to pot luck for the most part.

The proceedings also reach a point where many of the gags are ones the player has seen many times already. Admittedly some of the problems are caused by the language barrier but I doubt that understanding most of it would make much difference.

Don't get me wrong, Switch is one of the top Mega-CD titles and worth buying for its novelty factor alone.

Presentation 93%
A brilliant introductory cartoon is followed by a simply understood menu of options.

Graphics 97%
Switch gives you the impression that you're controlling a cartoon on TV. The sequences are brief but high quality. Here are some of the funniest sight-gags around.

Sound 94%
The Mega-CD is the perfect medium for the freakish sound effects. All the music is perfectly reproduced and has variety enough to prevent repetition from becoming annoying.

Playability 72%
P. The desire to see every single gag is irresistible.
N. Switch is basic. Pressing a button is not the most inspiring of pastimes in the end.

Lastability 60%
P. Switch will always be welcome at parties, ensuring the game has a long life.
N. Game masters may find this dull after a while.

Overall 70%
Another outstanding showcase piece of software for the Mega-CD. Switch is sure to satisfy most people's sense of humour, but not their games-playing skills to the full.

I've never seen anything like this. It's a mixture of the bizarre, the funny and the sick... The first day I played it, my jaw was periodically hitting the floor.